The lowdown on Jeff Bezos' salary, net worth, education and career history 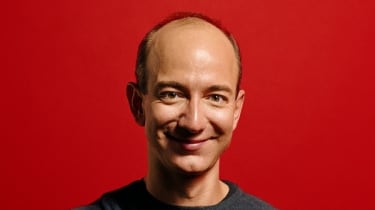 Jeff Bezos is one the most powerful men in the technology industry. He is the founder and CEO of online retail giant Amazon.com and acquired The Washington Post paper in 2013. Bezos has led the company since its founding in 1994 to spectacular growth and power within the industry.

Amazon is a giant but what about the man behind it? How did Jeff Bezos turn a home-grown outfit running out of his garage into the largest online retailer in America?

Salary:$81,840, making him one of the lowest-paid CEOs in America

Education:Bachelor's degree of science and engineering in electrical engineering and computer science

Career history:Bezos worked on Wall Street for eight years after graduating from Princeton.

The bankers were impressed. "Bezos was unusual not only for his balanced intellecthe could handle complex logic as well as articulate his thinkingbut also for the overall package: smart, creative, personable," according to profile in Time.

However, he left for Seattle after hearing about rising internet use and a Supreme Court ruling that online retailers did not have to pay sales tax in states where they are not physically present.

It was a bold move from someone with a good job at a hedge fund, but he realised he would rather try something bold and fail while the internet was young than miss out.

He gathered some start-up cash from family and friends and started Amazon out of his garage. His "pathologically happy and infectiously enthusiastic attitude" won support from employees.

The company began as a bookseller in 1995. By 1996, it was on the front page of The Wall Street Journal. It survived the dotcom bubble and 20 years of competitive rivalry to gain its current position.

Bezos never paid himself well. Even to this day, his annual cash salary isn't even six figures. However, his 87 million shares of Amazon (19 per cent) make him a billionaire.

But, like most technology entrepreneurs, Bezos isn't focused on just one thing. In 2000, he created human spaceflight start-up Blue Origin with the aim of helping "anybody to go into space." A well kept secret for a number of years, he only went public in 2006 and, in 2013, he was reported to be in space travel discussions with Sir Richard Branson of Virgin.

Also in 2013, Bezos (rather than Amazon) acquired The Washington Post newspaper for $250 million.

Interesting fact(s): Bezos' low salary is only 14,000 more than the average Facebook intern, according to Business Insider.

Having always had an interest in science, as a boy he created an electric alarm to keep his younger siblings out of his bedroom. Clever as that was, it doesn't top the fact he used a screwdriver to dismantle his crib as a toddler, according to Achievement.org.