The lowdown on Steve Ballmer's salary, net worth, education and career history 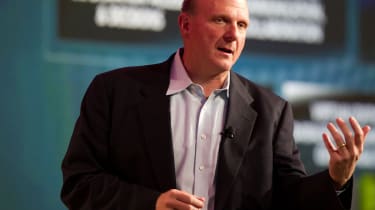 Microsoft made headlines when it appointed Satya Nadella as its new CEO. The incoming chief executive replaced longtime head Steve Ballmer, who had led the company for 14 years.

Ballmer had served as CEO of Microsoft for the past decade and helped decide its course. Despite great success at growing the company and tremendous profits, Ballmer never enjoyed much popularity. His time was too mixed, too controversial.

Education: Bachelor of arts in applied mathematics and economics from Harvard

Best known for: CEO of Microsoft

Career history: Steve Ballmer originally met Bill Gates when they went to school together at Harvard in the 70s. This friendship proved important later when Gates needed a business manager for his startup, Micro-soft. He called Ballmer.

Microsoft co-founder Paul Allen described Ballmer in his autobiography as intimidating, saying: "I thought, This guy looks like an operative for the NKVD.' He had piercing blue eyes and a genuine toughness."

However, Ballmer's real contributions to Microsoft began when Gates stepped down as CEO in January 2000 and gave him control. As chief executive, Ballmer made tremendous profits for Microsoft.

He almost tripled revenue from $25 billion to $70 billion, making a gross profit of 75 cents on the dollar. These improvements mainly came from Windows and Office, Microsoft's two most successful products.

"At our company, I'm very proud of the fact that we've done at least two [great things]," Ballmer said in a speech at Oxford's Business School.

"We really invented the modern PC by building Office. Then the second thing we did was really bring microprocessor technology into the data center."

However, Ballmer's tenure as head of Microsoft was marked by what the company missed. As innovators like Amazon, Apple, Google and Samsung reinvented the web and mobile devices, Microsoft did nothing. It ignored anything that could threaten its cash cows, Windows and Office.

Ballmer himself disdained the biggest trends of the past decade. In 2007, he famously told the press: "There's no chance that the iPhone is going to get any significant market share. No chance."

As a result of Ballmer's decisions, Microsoft's stock has hovered around the same price for the past decade. Hedge fund manager David Einhorn called him "the biggest overhang on Microsoft's stock."

By 2013, the investors were fed up. Rumours suggested he was forced to retire early. Sure enough, the news boosted Microsoft's stock by 7.5 per cent.

Interesting fact: Ballmer is known for his exuberant, energetic personality. His presentations were marked by profuse sweating and shouting.