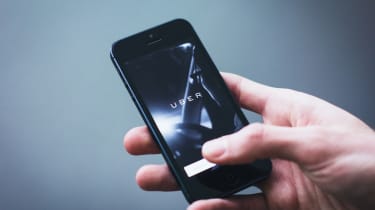 Uber's CEO has dropped out of Trump's business group after 200,000 users deleted the ride-sharing app - though Telsa founder Elon Musk will stay on.

Travis Kalanick has resigned his seat on US President Donald Trump's business advisory council, following public criticism and an online campaign to #DeleteUber.

That follows Trump's weekend executive order that banned people (mainly Muslims) from seven countries from entering the US, catching out Silicon Valley workers and leading to protests at major airports around the country. In New York, taxi drivers refused fares from JFK International Airport for an hour, prompting Uber to remove its surge charges during the mini-strike, which some took as a pro-Trump tactic.

That sparked a call to ditch Uber, encouraging users to not only uninstall the app but to delete their accounts. So many people took part that Uber had to automate its response. Reports suggest the company saw as many as 200,000 deletions out of its user base of some 16 million people.

Kalanick appears to be listening to users and his critics. He had pledged to bring up the executive order at the council, but in an email to staff, said he has quit before the first meeting, expected to be held today.

Kalanick said he spoke "briefly" to Trump about the executive order and "its issues for our community".

"I also let him know that I would not be able to participate on his economic council," he continued. "Joining the group was not meant to be an endorsement of the President or his agenda, but unfortunately it has been misinterpreted to be exactly that."

He said that Uber would advocate for change on the immigration issue, saying it was tearing apart families and harmful to Uber's business, "but staying on the council was going to get in the way of that".

Kalanick said that Uber staff - including drivers - helped remind him of "our most essential cultural values".

Following Kalanick's departure, Musk has said he intends to stay on the council - and pledged that he and others attending "will express our objections to the recent executive order on immigration and offer suggestion for changes to the policy".

Musk added: "Advisory councils simply provide advice and attending does not mean that I agree with actions by the Administration I understand the perspective of those who object to my attending this meeting, but I believe at this time that engaging on critical issues will on balance serve the greater good."

Other members of the council include include the CEOs of Wal-Mart, Walt Disney, GM and General Electric.