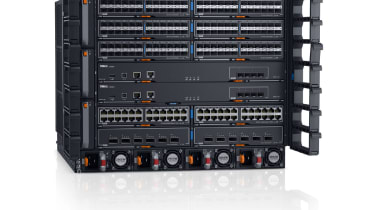 The former two devices are aimed at mid- to large-scale campus environments. It claimedthat both of these would help in improving scalability and simplify management.

It added these would provide a single point of control for quality of service, policy provisioning and software upgrades, as well as for programming software-defined attributes.

The new Dell Networking C9010 Network Director is a next-generation multi-rate capable modular switch and is the first platform based on the new Dell campus network architecture. It scales up to 4,000 virtual ports managed centrally, with support for 10Gb and 40Gb Ethernet today, and a tool-free upgrade to 100GbE in the future to meet the growing bandwidth requirements, according to the firm.

It added that when this was paired with the C1048P Rapid Access Node, this would extend the capabilities of the C9010 Network Director by providing enhanced power over Ethernet as well as user access and connectivity back to the C9010. The C1048P can be deployed either stand-alone or in a stacked configuration.

The Dell Networking S6100-ON is aimed at datacentres and combines multi-rate connectivity with chassis-level modularity and open networking. Through multiple expansion modules, customers have the flexibility to deliver various combinations of port speeds ranging from 10 100 GbE with both QSFP28 and CXP port choices for flexibility in deployment.