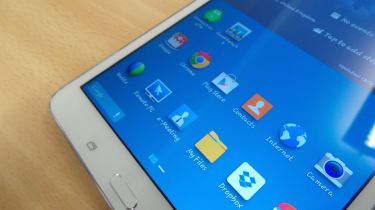 Samsung has unveiled the Galaxy Tab S, which the South Korean vendor is pitching as an entertainment and productivity-focused tablet.

As such, Samsung has touted the tablet's richer and more immersive mobile display. Main features highlighted include those designed around making the product an "unrivalled entertainment experience," as well as various productivity features and a fresh and practical design.

The screen purports to display richer and crisper colours with more than 90 per cent of Adobe RGB colour coverage and a 100,000:1 contrast ratio. As well as making the Super AMOLED display more colourful, Samsung is also claiming the tablet can display more realistic images.

The Adaptive Display intelligently tailors the gamma, saturation, sharpness and colour temperature to the environment in which the tablet is being used and the nature of the application. This ties in with its promise to allow improved outdoor use, with advanced visibility technology preventing bright sunshine from becoming debilitating.

JK Shin, CEO and president of the IT and Mobile Division at Samsung Electronics, said: "The tablet is becoming a popular personal viewing device for enjoying content, which makes the quality of the display a critical feature.

"With the launch of the Galaxy Tab S, Samsung is setting the industry bar higher for the entire mobile industry. It will provide consumers with a visual and entertainment experience that brings colours to life, beautifully packaged in a sleek and ultra-portable mobile device."

Both models, the 10.5in and 8.4in, are designed to be light and portable at 465g and 294g respectively. It comes with customisable accessories, such as the versatile Book Cover, the Simple Cover or the handy, ultra-slim Bluetooth Keyboard.

The devices will go on sale on 4 July in the UK, with the pricing for the 8.5in device starting at 349 for the Wi-Fi only model. Those requiring 4G will have to stump up an additional 100.

With the enhanced productivity and security features of the Galaxy Tab S, users can receive calls from their phone to their tablet, connect to nearby devices through Quick Connect, and easily multitask with simultaneous app use. There's also the built-in Fingerprint Scanner that improves security when accessing the device.