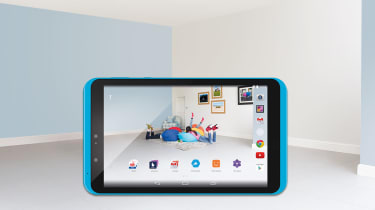 Tesco is to release the follow-up to its low-cost Hudl tablet, Hudl 2, on 9 October and has promised the device will offer better speeds, screen resolution and sound quality than its predecessor while remaining at the cheaper end of the market.

The 8.3-inch tablet is three times faster than the original Hudl with a 1.83GHz quad-core Intel Atom processor and has been optimised specifically for streaming video and boasts a more responsive gaming experience, Tesco claims.

There has recently been speculation that Blinkbox, Tesco's video streaming service, would be sold or shut down, but Blinkbox founder and group digital officer for Tesco, Michael Comish, declined to comment on reports at the launch event.

The screen resolution has been boosted to 1920 x 1200, and the audio improved with integrated Dolby technology. It will also be available in eight different colours and will allow users to set up seven user profiles.

Comish said: "It's undergone a complete redesign with additional investment in hardware, software and user experience. We've improved on the tablet in every conceivable way.

"Over the past year we've invested in the design of the new Hudl, and also the hardware itself. By the time it reaches our customers, we will have spent more than 15,000 hours testing every aspect of the device."

The first Hudl tablet was apparently the fastest selling tablet for the company with more than 75,000 units sold since it was launched.

"The first Hudl was used by many people as a secondary device," Comish continued. "We believe that the Hudl 2 will become the primary tablet for those who buy it."

The low price point of Tesco's tablets has been what's made the Hudl range most attractive and so, at 129, it's clear the company is keen to keep this a part of its brand. The Hudl 2 will also be available on Clubcard Boost for as little as 65.

The tablet's first iteration is currently on sale for a discounted price of 99 from Tesco stores.

"We don't think we have it right. We don't have all of the answers at this stage and we're going to continue to work on the apps and develop it as we do with all of our devices," Comish added finally. "But it's a great starting point."

Tesco recently shut down plans to launch a new smartphone, reportedly due to competitive pressure, and is instead focusing on the tablet market.