Rumours of a larger 12in Apple tablet have recently surfaced, with release slated for 2015 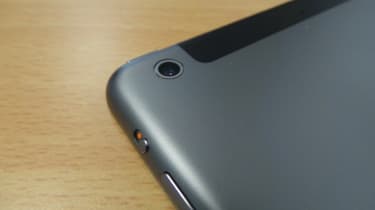 Apple is rumoured to be planning a larger 12in tablet to be released in 2015, with various rumours regarding size, release date and production currently circulating.

According to a report from GizmoChina the device previously referred to as both the iPad Pro and iPad Air Plus - will actually be called the iPad Plus.

The latest rumours has production of the larger iPad delayed until September 2015, according to "people familiar with the company's plans," which is due to issues with the display panel supply. Before this setback, production had been planned to begin in the current quarter, they claim.

The site also purports the tablet will feature a 12.9in display with 2K resolution, be 7mm thin, and weigh-in at 700g. The device's battery capacity will also reportedly increase to 11000mAh.

A leaked image that claims to show the tablet's design appeared on Chinese social network Weibo, and displays various features that were previously rumoured by other sources.

A photo of what appears to be the iPad Plus shell previously surfaced courtesy of Nowherelse.fr (via CultofMac), a somewhat reliable source for similar leaks in the past. The image reveals a speaker placed on top of the iPad, indicating the new device could offer improved sound quality.

Another leaked image courtesy of twitter user @ricardowec also purports to show the mould for the iPad Plus from the Foxconn factory in China.

French website Nowhereelse.fr (via MacRumors) has revealed alleged photos of the new iPad's case, with cut-outs for a Lightning connector, rear-facing camera, microphone, volume rocker, and mute and power buttons all present. It doesn't, however, appear to have the left-side cut-out shown on previously leaked images.

New rumours have claimed the device may run OS X Yosemite, rather than iOS as is the norm for Apple's tablets. This would make it a direct competitor to hybrid devices, such as the Microsoft Surface, which have been gaining ground in the sector.

A leak via Japanese site Macotakara (via MacRumours) adds weight to many of the rumours already circulating about the "iPad Pro" or "iPad Air Plus," with magazine Mac Fan publishing what appear to be schematics.

The document claims the new iPad will have a 12.2-inch LCD display and dimensions of 305.31mm x 220.8mm x 7mm. It also suggests the tablet will use a new A9 processor, which is likely to be the next iteration of the A8X processor featured in Apple's iPad Air 2.

The iPad Plus could also sport dual speakers, placed at the top and bottom of the device, but otherwise appears to be fairly similar to the iPad Mini and iPad Air 2 in terms of design.

The Wall Street Journal (via MacRumours), in addition to claims that production for the iPad Plus would indeed be delayed until September, also hinted at USB 3.0 ports for the tablet.

The report says: "Apple has continued to rework some of the features of the larger iPad. It is now considering the faster technology for data synchronisation between the larger iPad and other computing devices... The company has also been considering adding ports to connect to a keyboard and mouse."

Fresh rumours from Apple Insider have the iPad Plus introducing an "Apple Pen." The claim comes from Ming-Chi Kuo, a notoriously reliable analyst, saying the new tablet would be marketed towards artists and other creative users with Apple's own stylus.

Kuo says: "Given that it's more precise than a person's fingers, a stylus can be more convenient to use than the combination of keyboard and mouse in some cases. Therefore, we believe Apple's stylus will improve the user experience of [the] 12.9-inch iPad."

Kuo also believes an iPad stylus would initially be treated as an optional extra.

"We don't foresee significant sales of an optional stylus in 2015 and forecast unit shipments of 2-2.5 million," he continued. "But we believe that the stylus could improve the experience of users, however, and will likely help Apple develop specific customer groups such as the corporate sector and educational institutions."

The rationale has most consumers sticking with the iPad Air or iPad Mini, which means the iPad Plus would have to set itself apart to appeal to a brand new market.

Apple is expected to unveil the new iPad with its next batch of announcements, and a new tablet was previously rumoured for release alongside the iPad Air 2 and iPad Mini 3 back in October. It did not make an appearance at that particular Apple event, but new reports have slated it for a 2015 release instead.

Rhoda Alexander, an analyst at IHS, told FoxNews: "The release timing is fuzzy, it may not appear until Q4 with the other iPad updates. We are, however, getting input from both the component and [product] side that this is a real product, and part of their 2015 building plan."

In Apple's most recent earnings conference call, CEO Tim Cook said of the tablet's future: "Over the long arc of time the iPad is a great business. I also have visibility obviously of what's in the pipeline and feel very, very good about that."

The company is said to be looking at a larger tablet due to wider trends that have indicated consumers prefer devices with larger screens a theory supported by the unprecedented popularity of the iPhone 6 Plus.

The device is tipped to cater to the needs of enterprise customers, fitting into the same sector as Microsoft's Surface Pro 3.

However, previous reports regarding the as-yet-unconfirmed iPad Plus have suggested that production of the tablet may have been delayed due to the strong sales for the iPhone 6 and iPhone 6 Plus.

Addressing the pressure on manufacturers, Cook said: "While our team managed the manufacturing ramp better than ever before, we could have sold many more iPhones with greater supply and we are working hard to fill orders as quickly as possible."

iPad sales in general have been disappointing for Apple, with tablet sales figures steadily declining in 2014. Sales for iPads and other tablets grew by 55 per cent in 2013, but are only set to see an increase of 11 per cent in 2014, according to analysts.

This has been blamed on the widely-held perception that tablets don't need to be upgraded as often as smartphones, with Apple's consumers using their current iPads for longer than they might do their iPhone.

It is rumouredthe iPad Plus, along with an iPad Mini 4, could launch sometime between April and June this year, though it is unknown whether delays to production have impacted this.

This article was originally published on 11/11/14 and has been updated multiple times (most recently on 05/03/15) to reflect new information available since publication.