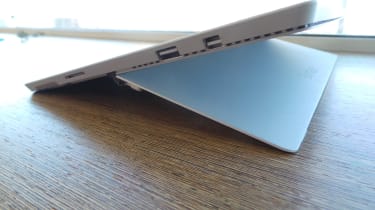 It has been suggested Microsoft may choose its 2015 Build conference to unveil the Surface Pro 4, with the tablet-laptop hybrid possibly coming in a variety of size options.

The event is taking place between April 29 and May 1. Earlier in the month, DigitTimes reported that Microsoft is planning to launch the tablet at the developer conference, with mass production to begin in June.

The company's current flagship device, the Surface Pro 3, has a 12.2-inch display, but the Pro 4 looks set to edge towards the larger and smaller tablet markets with both 10-inch and 14-inch models in the offing, according to IBT.

According to fresh rumours from 36KR (via TrustedReviews), the Surface Pro 4 will have a fanless design like its predecessor, with small holes on the device used as a cooling system.

This change will ensure that the device will be "significantly thinner", though the weight will likely be similar to the Surface Pro 3. It will reportedly sport a 12-inch display.

Rumours cited by Christian Post also suggest Microsoft could be planning to release a smaller 8-inch tablet, with the larger model having a display of either 12 or 14-inches.

According to Christian Today, Microsoft could indeed be planning a dual launch of the Surface Pro 4 and Surface Pro Mini, with 10.1in and 8in displays, respectively. This will put the smaller model directly up against tablets such as the iPad mini, Nexus 9 and Galaxy Tab range.

It would make sense for the Surface Pro 4 to launch alongside Windows 10, with the operating system's inclusion of universal apps across desktop and mobile a feature that has been highlighted.

In December, GforGames also claimed a smaller tablet would be announced soon, despite persistent claims that the Surface Mini has been scrapped.

According to Design & Trend, a 10-inch model will sport less impressive specs, though a 14-inch version will likely have a 2160 x 1440 pixel display resolution, an Intel Core M processor and a longer battery life. It could also have a slightly lower price tag compared to the Surface Pro 3.

A Surface Pro Mini has also been rumoured for some time, though Microsoft has yet to official announce either device.

This article was first published on 6/1/15 and has been updated several times since (most recently on 29/4/15) to reflect new information.