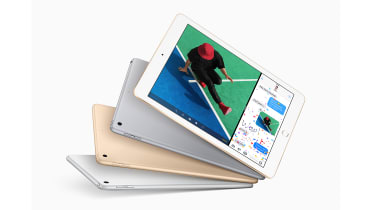 iPad has finally released a successor to the iPad Air 2... sort of. In an unexpected move, the company has removed the iPad Air 2 from its online storefront, replacing it with a brand new 9.7in tablet known simply as "the iPad".

This is sad news for die-hard devotees of Apple's previous mid-range model. Though its death has been long rumoured, the iPad Air 2 is now officially dead, and the Air 3 little more than vaporware. Instead, it's been replaced by an entry-level, middle-of-the-road iPad designed to sit between the Pro and Mini ranges.

While the device is all-new, there's nothing here we haven't seen before - hence why Apple didn't bother launching it with its usual special event. The only real upgrades are a move from Apple's A8X processor to the newer A9 chip, and a slight bump in screen brightness.

Anyone expecting a proper successor to the iPad Air 3 will be disappointed, particularly as the new tablet is actually 1.4mm thicker and 32g heavier than the iPad Air 2 was. It's a negligible increase, but it's not really a true heir to the razor-thin iPads of old.

Elsewhere, the specs are pretty much the same; it's still a 9.7in Retina display with a 2048 x 1536 resolution, it's still got TouchID and a lightning connector, and Apple still boasts "all-day battery life".

The main headline change, of course, is the price. The new iPad starts at 339 for the 32GB Wi-Fi only model, rising to 469 for the LTE-enabled version. This is in comparison to the iPad Air 2, which launched for 399. Available in gold, silver and space grey, the new iPad will be available to order from 24 March.