This firmly average tablet does everything well, but nothing exceptionally 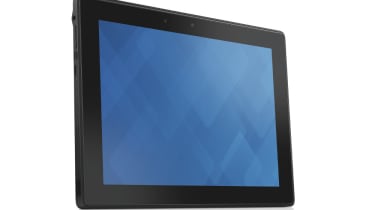 Dell, long-time titan of the laptop and desktop PC landscape for years, has been going mobile in recent years. Efforts to capitalise on the growing trend of tablets and laptop-tablet hybrids as business tools have led to devices such as the Venue 8.

The Venue 10 Pro is the latest in Dell's line of business devices, so it uses Windows 8.1 instead of Android. As expected, it's powered by an Intel Atom processor.

Some of Dell's computers look elegant, sleek and refined, whilst others are boxy and basic in appearance. Sadly, the Venue 10 Pro does not fall in the first category.

The 9.9mm-thick Venue is far from the slimmest tablet we've ever tested. The rounded corners and chunky bezels give it a distinctly mid-range look, and the large display surround means it doesn't have the pleasing screen-to-body ratio of the Venue 8. 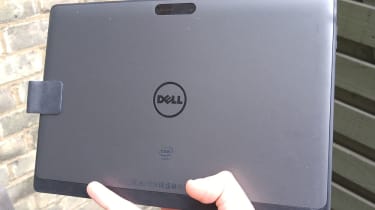 The colour scheme opts for a nondescript combination of space grey' for the back panel and black for the edging. It's not particularly inspiring, resembling a mid-range Dell Latitude, so it'll blend in perfectily in most corporate IT environments.

It's also not the most comfortable tablet to use: the hefty 657g is a little heavy for a 10in tablet and makes even two-handed operation strenuous after a while. The bezels around the edge aren't particularly ergonomic either. At the same time, the trim around the outside feels unsettlingly flimsy, and seems liable to detach if placed under any undue strain.

Overall, the build quality's a bit sub-par, especially when compared with its much sleeker cousin, the aluminium-backed Venue 8. We wouldn't go so far as to call it ugly though and it's serviceable enough. 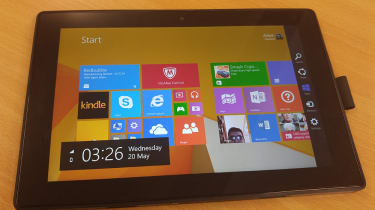 280x800 pixels. Screen quality is a little disappointing; the maximum registered brightness of around 205 cd/m2 is quite a bit below what we'd expect. A contrast ratio of 837:1 also isn't stunning.

It's bright enough to do the job, though. It may suffer under harsh sunlight, but brightness isn't going to be a problem in most situations where videos and documents are all still perfectly visible. The 1920x1200 resolution also ensures that text is crisp and clear.

The Venue 10 Pro is kitted out with a quad-core Intel Atom Z3735F processor running at 1.3GHz and 2GB of RAM. This is a common configuration seen in many other inexpensive Windows 8.1 tablets.

When we ran it through our suite of benchmarks, the Venue 10 Pro didn't put up an especially sterling performance. Its combined score of 19 is well below our baseline level of 100 and even falls behind the Microsoft Surface 3 which has a newer, slightly faster Atom. You shouldn't necessarily let that put you off, however.

In everyday use, we actually found it to be more than capable under pressure. It was able to handle multiple tablet apps concurrently, as well as more demanding desktop programs such as Word and Photoshop. Windowed working didn't present a problem either, with split-screen multitasking between the two types presenting no problem whatsoever. We even manged to have Netflix playing on one half of the screen while we typed this in the other with barely any lag.

However, it does have a tendency to heat up under stress. Most of the time it won't be an issue, but if you run demanding programs then you will feel the section of back-plate that conceals the processor getting very warm indeed.

As a Dell device, the Venue 10 Pro naturally comes in several different configurations. With various levels of price and sophistication, you've got a greater degree of choice than with other manufacturers, which is always welcome. 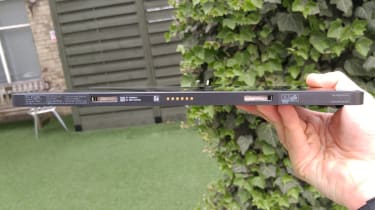 The 257.50 option is the best value option. The only difference between this configuration and the most expensive 324.17 version is that the costlier model includes built-in 4G - if you're tempted, make sure you'll really use it before buying.

As expected for a tablet equipped with an Intel processor, the Dell Venue 10 Pro runs full-fat Windows 8.1. Having a full desktop OS on a tablet definitely has its merits as well as a few drawbacks.

Windows 8.1 remains a comparatively unintuitive system to get to grips with, particularly when flicking between tablet apps and desktop Windows programs. However, once you've spent some time getting to know its various quirks and control mechanisms, it generally works very well. 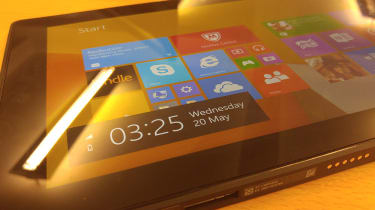 One thing that we do highly recommended is to check the setting that enables tablet apps to be displayed in the taskbar. Having done this, using a mixture of tablet apps and desktop Windows programs felt simpler and more natural.

When compared to Android and iOS rivals, Windows 8.1's ability to run larger desktop programs in addition to apps can be incredibly useful. The ability to run multiple apps and programs side-by-side is a key benefit.

Unfortunately, the Venue 10 is hamstrung by the selection of Windows tablet apps specifically designed for touchscreen use. Although the selection is getting better, it's still rather limited, and many popular mainstays feel like clunky knock-offs in comparison to slicker iOS and Android rivals. Tablet apps running on the Venue 10 also suffer from annoyingly long load times.

One thing it does have going for it is its onscreen keyboard. As well as the handwriting input option and a traditional keyboard, Windows 8 also includes a split-keyboard layout.

Designed for landscape typing, this keyboard is split down the middle, moving each side to the left and right, into easy thumb range. Unlike the similar layout on the iPad, you can even choose the size of the keys from small, medium and large options. All of this makes tablet typing a whole lot faster.

The Venue 10 Pro, as with many Windows mobile devices, comes bundled with a one-year Office 365 Personal subscription. Unless your company already subscibes to an enterprise version of Office 365 or a rival such as Google Apps Work, this is a winner in our book as the cloud-enabled version of Microsoft's suite is great for cross-device productivity. The Venue 10 Pro also comes with 20GB of Dropbox storage for one year thrown in as an extra.

While it doesn't come as part of the default package, Dell recommends the Active Stylus' pen tool as an accompaniment, and we'd have to agree. Though parts of Windows 8.1 are fine for tablets, the more traditional bits can sometimes be fiddly, and the pen makes navigating them much easier.

It also allows the use of handwriting as an input method, allowing you to quickly enter text anywhere you would through normal typing. It's a nifty input method, and one that's likely to be incredibly useful for short note-taking sessions.

The handwriting recognition is paradoxically hard to get your head around though. It analyses the words based on penstrokes rather than actual visual appearance, so if you form your letters in unusual ways, you may find yourself having to relearn how to write.

Elsewhere, the stylus is absolutely superb. The ability to read various levels of pressure makes it a must-have for artists. While it's not at the industry-professional standard of a dedicated Wacom graphics tablet, it's still very useful to have. For quick sketches or edits to existing artwork, it's very impressive indeed.

There are no surprises when it comes to connectivity. There's Bluetooth, a micro-HDMI port and one full-size USB port. There's no NFC, but that's not a huge loss. The most expensive version does come with 4G mobile broadband, although you do have to pay 80 extra for it. 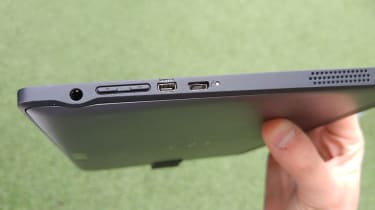 In addition to external USB storage, you can add more internal storage via the micro SD slot. Though we suspect most users will rely on cloud storage services to supplement the 32/64GB of built-in storage, it's still nice to have the option of bumping it up physically.

Battery life was lengthy. It lasted just over 11 hours in our light usage test for laptops. We'll update this review with the results of our video playback test as soon as we have them.

The Venue 10 Pro should have enough charge to carry you through a full workday.

As a tablet, the Venue 10 Pro is good, without being astounding. It's a little too heavy and chunky, while the quality of the screen could be better.

It's also sufficient for use as a laptop if you purchase the optional keyboard dock. While Dell doesn't have any UK pricing on their website, the prices of keyboard docks for older Dell tablets indicates that it may be over 150. As well as increasing the price considerably, Dell's keyboard dock will also increase the Venue's already-substantial weight and thickness.

The Dell Venue 10 Pro doesn't particularly excel in any area, but its combination of Windows, battery life and reasonable pricing make it worth considering if an Android or iOS tablet don't quite match your needs.

The Venue 10 Pro isn't particularly exemplary, but it's perfectly sufficient as a secondary work device for slipping in a bag and taking to conferences.