The latest Yoga tablet is a gorgeous machine, but is it enough of an upgrade to be worth buying? 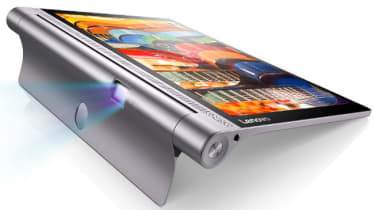 Lenovo has announced the newest iteration of its tablet range at the IFA trade show in Berlin, with the Yoga Tab 3 Pro 10.

In essence nothing has been drastically changed for the new Yoga Tab, but merely updated and refined. Like its predecessor, it features an adjustable kickstand for optimised viewing angles, as well as an inbuilt projector for beaming content onto walls.

This projector, Lenovo says, can project an image up to 70 inches, which is impressive if it works. The demonstrations we saw weren't especially bright or clear, and while we'll admit that it was hardly operating in good lighting conditions, it didn't fill us with huge amounts of confidence.

Aside from the aforementioned projector and kickstand, there's also a 10.1in Quad-HD display and Dolby Atmos speakers the first of their kind on a tablet, according to Lenovo.

Billed as the "ultimate video tablet", Lenovo is packing the Tab 3 Pro with as many multimedia features as it can, including a partnership deal with Netflix, whereby Lenovo has collaborated with the streaming giant to ensure that all of its content is as smooth and hi-definitionas possible on the new device.

The Yoga Tab 3 Pro has also got a larger battery than the Tablet 2 Pro: 10200mAh compared to 9600mAh, supposedly offering 18 hours of battery life. Whether this holds up to the intensive media consumption Lenovo is marketing it for remains to be seen, however.

Inside, we know the Tab 3 Pro is packing an Intel Atom x5-Z8500 CPU, with Android 5.1 and Lenovo's AnyPen technology preinstalled. The latter is a feature that allows you to use any metal object as a stylus, and is a surprisingly useful tool.

Lenovo's new Yoga is also now rated IP21 for splashproofing, meaning it'll be safer taking it in the bath for media browsing. It still doesn't beat fully-waterproof tablets like Sony's Xperia range, but it's definitely a step in the right direction.

The build quality is absolutely superb. The kickstand's hinge action feels smooth and satisfying, the cylindrical battery on one side makes it exceptionally easy to hold, and the leather backing feels deliciously premium, as does the brushed-metal detailing on the exterior. It's a really rather attractive device.

The fact remains, though, that it's really not that much of an upgrade over the last iteration. For those that haven't got a Yoga tablet already, it's unlikely to be an issue, but if you've already got one of your own, the real test is likely to be how the new projector performs in comparison with the slightly lacklustre previous attempt.