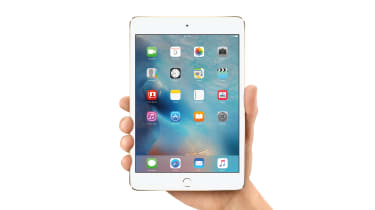 Despite lasting only a year on the shelves, the iPad Mini 3's short lifespan did teach Apple one thing: customers want substantial changes to their devices, and not small incremental updates.

Apart from the TouchID fingerprint sensor, the iPad Mini 3 offered very little in the way of change, reflected in the fact that you can no longer buy it new, with only refurbished or second hand ones still available.

The iPad Mini 4, however, was an entirely different beast. It delivered an almost identical feature set to that of the 9.7in iPad, which naturally bumped its price up a tad, but still remained significantly cheaper than the larger model.

So is the iPad Mini 4 something you should consider buying, or should you save some cash and buy a perfectly capable second-hand iPad Mini 3? We pitted to two tablets against each other to see whether newer really is better.

More than any other factor, price is probably your biggest consideration if you're weighing up Apple's iPad Mini 4 and iPad Mini 3.

The major differences between the iPad Mini 4 and 3 are internal - as you'll soon see - so spending a bit more will make a difference.

Apple decided to do away with the 32GB and 64GB models of the iPad Mini 4 in March 2017, meaning only the 128GB model is available. The company also dropped the price drastically so you'll pay the same as you did for the 32GB iteration, just with four times as much storage.

From the Apple Store, or selected retailers, the 128GB Wi-Fi model costs 419 and 549 for models featuring Wi-Fi and cellular.

Secondhand 16GB Wi-Fi models of the iPad Mini 3 sell for half the price, at around 200-250 online depending on where you find them.

The iPad Mini 3 is 7.5mm thick, whereas the Mini 4 is noticeably thinner, matching the iPad Air 2 at 6.1mm. Unfortunately this slender profile means the Mini 4 lacks the hardware switch found on the Mini 3, which lets you mute the device or lock a screen orientation.

Yet this does mean the Mini 4 is a little lighter at 299g for the WiFi only version, compared to 331g of the Mini 3.

Sadly, the colour selection is rather limited for both devices, which are only available in white, grey or gold.

The iPad Mini 3 and 4 share almost identical screens 7.9-inch with a 2048x1536 pixel resolution and 326ppi pixel density. As with the colour of the casing, the biggest surprise is what's missing the pressure sensitive 3D Touch technology remains the preserve of the iPhone 6s with no sign of it on Apple's mini tablet.

There are bigger differences when it comes to wireless connectivity, although these won't impact a lot of people at least in the UK. Unlike the 802.11n Mini 3, the Mini 4 now supports 802.11ac. Apple hasn't stated what speed of 802.11ac is supported, but it's unlikely to be the 867Mbit/s speed given the limited amount of space for aerials in the casing. In any case, you'd have to be streaming or copying something truly massive to take advantage of that speed anyway.

The 4G-enabled variant of the iPad Mini 4 also supports more LTE bands than the iPad Mini 3 so it should work at 4G speeds in more countries worldwide. Unless you live or frequently visit one of the very few areas not previously supported by Apple's LTE band selection, though, this isn't that big of a deal.

The biggest difference between the iPad Mini 3 and Mini 4, besides the casing, is the processor. The iPad Mini 4 eschews the 1.3GHz Apple A7 dual-core chip of its predecessor in favour of an A8 processor.

Apple hasn't stated whether it's triple-core like the A8X found in the iPad Air 2. Cupertino is also mum on whether memory stays at 1GB or has been boosted to 2GB to match the Air 2. We strongly suspect that the iPad Mini 4 has an almost identical processor and memory to Apple's current flagship 10-inch tablet.

According to Apple's specifications, there's no difference in battery life between the iPad Mini 4 and 3 both are rated for 10 hours of internet usage.

There is a difference when it comes to the camera, though. The five-megapixel shooter with an f2.4 aperture on the iPad Mini 3 has been superseded by an eight-megapixel camera with a wider f2.2 aperture in the iPad Mini 4. Although the new camera is still rather elderly by modern standards it's effectively the same camera first introduced in 2012's iPhone 5. Still, for a tablet camera, it's a worthy upgrade on paper.

In all, the iPad Mini 4 offers refinement and improves upon Apple's compact tablet in ways that make a far better model than its immediate predecessor.