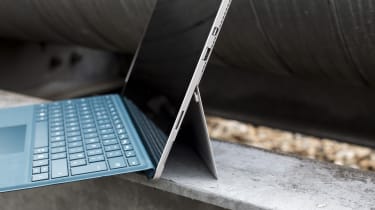 After years of being scorned by consumers and businesses, hybrid devices have become an accepted (even desired) category, and we've got Microsoft's Surface Pro range to thank for it. The Surface Pro 4 has shown that you don't need to sacrifice the performance of a laptop in order to have the functionality of a tablet, and it's wrapped up in a gorgeous exterior to boot.

The Surface Pro 4 shares the design sensibilities of Microsoft's other hybrid devices, with a matte magnesium alloy chassis and integrated adjustable kickstand. It's sturdy and functional, but also looks sleek and elegant, with an air of understated confidence.

The magnetically attached TypeCover screen cover still doubles as a keyboard and trackpad, and it's one of the best examples we've seen to date. It's easy to take off and reattach, and the connector is standardised across generations, which means you can use the superlative TypeCover released alongside the most recent Surface Pro. 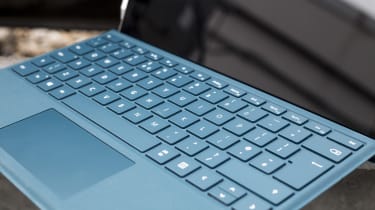 With heaps of resistance and crisp, firm feedback from keystrokes, the TypeCover is one of the most pleasant keyboards we've ever used on any device. The trackpad is superb, too. The only gripe we have with it is that it's sold separately to the Surface Pro itself (and at a not insubstantial price, too).

Measuring 8.45mm (without the TypeCover keyboard) and weighing 800g, it's light for a laptop, but slightly weightly compared to most tablets. It's too heavy to comfortably use handheld for more than a few minutes at a time, but it's not going to weigh you down at all when slung in a bag and taken out and about.

The keyboard cover is now stiffer than before. Although this comes at the expense of added thickness and weight (which takes the combined weight to 1.1kg), it means it's now actually possible to use the Surface Pro 4 on your lap in most circumstances - a feat that couldn't be said for previous models. There are still caveats though - the bigger your lap, then the more stable the Surface will be. Stability will also still be compromised if you cross your legs, although it's less of a problem that it was with previous Surface Pros.

The 12.3in screen is very bright, almost painfully so, with great colour accuracy and contrast. It also has a high resolution of 2736x1824 pixels, although that's sometimes as much of a hindrance as it is a benefit. Although the benefits of a high resolution screen are obvious, some Windows programs still haven't been updated to take advantage of all those pixels, so fuzzy, pixellated graphics or unreadably small text are still recurring problems, albeit not quite as common compared to just a year ago.

The high resolution, and the sheer size of the screen, are both essential for using graphics apps and the included stylus though. Drawing, painting, sketching and note taking would be trickier and more fiddly on anything less. Although the Surface Pen, as Microsoft calls its stylus, isn't quite as precise and lag-free as the optional Apple Pencil for the iPad Pro, it's still very good. It has a grippy texture, and a flat side so it doesn't roll away when placed on a tablet. We especially like the ability to magnetically dock the stylus to the side of the tablet, making it less likely you'll lose or misplace it. 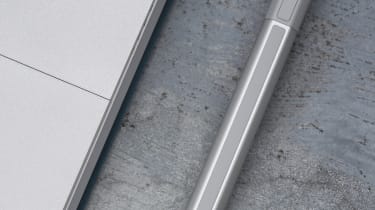 We like the eraser at the opposite end of the pen, as well as the ability to quickly double press it to launch Microsoft OneNote. The only disappointment here is the inability to customise this shortcut, so you can quickly launch the note taking program of your choice instead of OneNote.

Windows 10 has other stylus-oriented features, such as the ability to annotate web pages in Microsoft's Edge web browser. More stylus-specific features will arrive in a forthcoming Windows 10 update. These include a central launchpad in Windows for stylus-enabled apps, an updated virtual sticky notes app that will recognise handwritten dates and times as well as tools such as an onscreen ruler. Third-party app developers should easily be able to add the latter into their apps. If so, all these improvements should further improve the utility of the stylus.

The stylus is powered by a single AAA battery. Surprisingly though, there's no way to check the battery life of the stylus so there's a possibility you could get left high and dry unless you keep a spare AAA to hand. It's baffling that Microsoft hasn't included a stylus battery life indicator widget in Window's system tray.

It has plenty of flexibility when it comes to hardware peripherals as it has a full-size USB 3.0 port, a micro SD slot and a Mini DisplayPort. One of the Surface Pro 4's best features was, surprisingly, its Intel RealSense forward facing camera. It worked perfectly with Windows Hello in Windows 10. Once set up, a quick glance at the camera was enough for Hello to recognise our face and unlock the Surface Pro. It was quick, accurate and not fooled by a simple photo of the registered face.

Battery life, while okay, was a little disappointing given that the Surface Pro 4 uses Intel's Skylake processors which are supposed to be even more power efficient than its energy sipping predecessors. It lasted just over seven and a half hours when browsing the web and playing music while connected to a 802.11n router. When playing H.264 video on a loop, it lasted just over eight and a half hours. While these scores aren't bad, other tablets and laptops can last much longer.

This is a shame, especially as our review sample was easily fast enough to replace most laptops and desktops for all but the most demanding workstation-level tasks. Our unit came equipped with 8GB of memory, a 256GB SSD and a 2.4GHz Core i5 6300U dual core processor.

The Surface Pro 4 has a fan, but it never became loud enough to be intrusive unless we really pushed it with something demanding such as our video editing test. Even then, it wasn't as flawed as some other Windows tablets which not only have loud fans but pump out uncomfortable amounts of fan through their cooling events.

This configuration comes at a high price of 1,079 inc VAT though (and remember, that price includes the stylus but not a keyboard cover). Although there are cheaper versions available, we'd currently recommend against them. There's a 849 model which retains the Core i5 but has only half the RAM and storage space, shortening its useful life span. There's an even cheaper 749 configuration based around the Core m3 processor, but performance is a distinct let-down.

Although Microsoft's marketing would have you think otherwise, making a laptop-tablet hybrid is all about compromises - choosing and refining those features considered most important. Microsoft's basic design philosophy hasn't changed since the very first Surface Pro. What has is the quality of their materials, production processes and components allowing the Surface Pro 4 to be thinner, more stable and more comfortable to use than any of its predecessors. It's far more usable as a laptop thanks to its improved keyboard cover and, if peripheral flexibility is more important than weight, it's not a bad tablet either thanks to its ports and Windows 10.

It's still not perfect though, as you have to live with certain trade-offs. It's still not as effortlessly usable on a lap as a proper laptop, while its weight and continued paucity of touchscreen apps continue to hold it back as a tablet. Its battery life is also somewhat disappointing. We also noticed a few bugs in the driver for the Intel integrated graphics chip which caused the screen to go blank even while programs were actively running the only way to get around this was to plug in a second monitor temporarily.

The Surface Pro 4 is by no means a bad computer; it's merely a niche one and if you can live with its slightly odd, niche mix of design choices then it's a good computer.

The best Surface Pro yet, but it’s still not for everyone