The biggest and strangest iPad yet 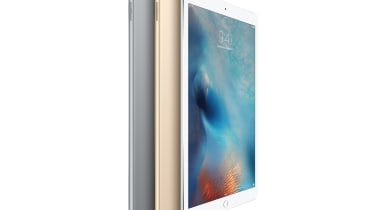 Although Apple's main 9.7in iPad line of tablets has spawned the smaller iPad Mini, that smaller tablet can be used in almost the exact same way as its larger counterpart. The same can't be said for the new 12.9in iPad Pro which is a very different beast to its two smaller cousins.

The first thing that strikes you about the iPad Pro is its weight and size, especially in comparison to the iPad Air and iPad Mini which seem to get thinner and lighter with every new iteration. Its screen is effectively the same size as a 13in laptop screen, but with a 4:3 aspect ratio so it's noticeably taller and wider than most widescreens.

It's relatively heavy too - at 713g for the WiFi-only model (723g for the one with built-in 4G), it's closer in weight to the very first original iPad released back in 2010 as well as most similarly sized Android and Windows tablets. It doesn't feel too ungainly in hand thanks to its slenderness and evenly distributed weight, but it's still hefty and awkward enough that it'll spend more time on your lap, torso or table than it will held aloft either single or double handed. 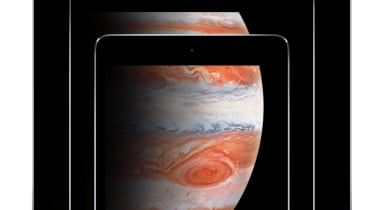 What it can do well

It could've lasted even longer, but Apple decided to sacrifice a little internal volume for the four speakers instead of an even larger battery. These automatically adjust the sound depending on the orientation of the tablet in your hands or on your desk. You won't confuse them for a quality set of desktop or home entertainment speakers, but they do sound noticeably louder and clearer than previous iPad speakers - especially as they still aren't forward-facing speakers but point outwards from the tablet's rim instead.

The iPad Pro is the fastest iPad ever with blistering scores across all our benchmarks thanks to its 4GB of memory, the largest amount ever in an iOS tablet, and the 2.26GHz A9X dual core processor. It's as fast as the low voltage Core 2 Duo processors found in ultra portable laptops a few years ago which is quite a feat for an ARM-based processor.

The iPad Pro needs this much power if only to drive its screen which has a resolution of 2732x2048 pixels - a resolution almost high enough to fit two iPad Mini Retina screens in side-by-side. The extra working space makes using iOS 9's new multitasking features feel far less cramped than it does on smaller iPads. 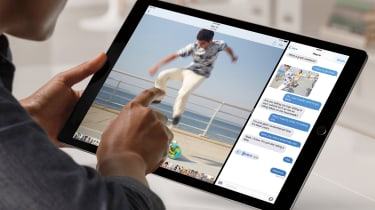 The 12.9in screen is very bright with excellent contrast and colour accuracy. Although the large screen makes watching movies, flicking through photos and using complex apps such as Garageband especially enjoyable, despite the accompanying unwieldiness, it really comes into its own when used with the optional stylus.

The Apple Pencil, as Cupertino calls it, is easily one of the best things about the iPad Pro which makes it all the more odd that it's sold separately for an extra 79. Apple almost certainly wants to emphasise that the Pencil isn't a necessity - iOS as a whole is still best navigated and controlled using your fingers. 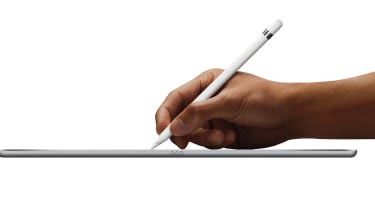 The Pencil is brilliant for sketching, drawing and painting though. Thanks to tilt, pressure and orientation sensors built into both the Pencil and the iPad Pro's screen, it's far more accurate and precise than any other tablet stylus we've seen. It has far less lag too. It's closer to a Wacom desktop graphics tablet than it is to any other tablet stylus. The palm rejection works almost perfectly, so we never had to worry about stray inputs or marks. 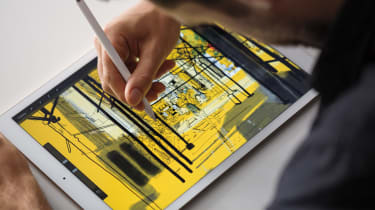 Despite the name, the Pencil doesn't have an eraser at its other end. Instead there's a male Lightning connector protected by a cap. When you plug it into the iPad Pro before first usage, the two will automatically pair over Bluetooth which is a nice touch. Some might find the glossy surface of the Pencil a little too slippery in hand though. Another apparent oversight is there isn't anyway to safely stow the Pencil while in transit, while the cap and equally small charging adapter could easily be lost too.

There were plenty of graphic arts app available on iOS even before the iPad Pro and Pencil arrived. Most work well with the Pencil even if they haven't been updated to specifically support it, although doubtless many will be updated in due course. We'd be surprised if non-graphics oriented apps supporting the Pencil in new and innovative ways weren't released. 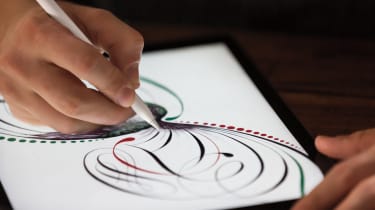 What it can't do well

Although there are a few note taking apps that support handwriting recognition, we have yet to see any that are good enough to recommend. You can simply scrawl your notes in Apple's Notes app using the Pencil and keep them as bitmap files, but for now the iPad Pro isn't great if you want to take handwritten notes and have them transcribed via OCR too so you can edit them later.

Apple hasn't explicitly marketed the iPad Pro as a laptop replacement, but the company nonetheless sells its own portable keyboard cover for it - the first for any iPad. The front is made of a soft-touch rubber-like material, while the inside of the cover is a material that helps lift away dirt and oil from the screen. The flap containing the keys and the keys themselves are clad in a weird material that feels somewhat similar to the nylon used in sports bags. It's unusual keyboard in many other ways too.

Like the 12in Retina MacBook, the keys don't have a lot of travel compared to most laptop keyboards. Touch typing was still fast and accurate though as the keys have plenty of feedback, are large and aren't completely lacking in travel. Oddly, the keyboard is only available in a US English layout. This is annoying enough for British users who need to type and frequently, but downright infuriating for multilingual typists. 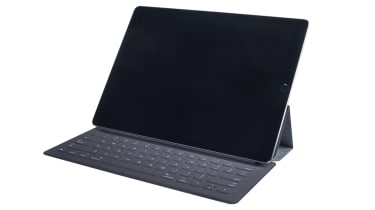 Although there is a key for switching between alternative onscreen software keyboards, such as emoji, GIF or other specialist keyboards, there aren't any other keys for accessing iOS features such as the home screen, Spotlight or Siri. You can use Command-Tab to switch between apps, a shortcut familiar to Mac users.

While some other common keyboard shortcuts are present, such as Option-arrow keys to move the text caret and Option-Shift-arrow keys to select text, others are curiously missing. For example, you can't navigate menus using the arrow keys. Keyboard shortcut support also varies by app, with some text editing apps missing support for common formatting shortcuts such as Command-B for bold. In apps that support it, you can hold down the Command key to see a list of supported keyboard shortcuts.

There's no touchpad, so you'll often have to prod onscreen controls on the upright touchscreen which is a recipe for arm ache. Much more surprising is the bulk of the keyboard cover compared to Apple's standard screen covers. Even more annoying is that the iPad Pro can only be positioned at a single angle when magnetically docked to the keyboard cover. This lack of adjustability means it won't always be possible to get a comfortable viewing angle while typing on the iPad Pro using the keyboard cover - situations where most laptops would have no trouble.

We also have severe doubts about comfortable lap usage. Although the keyboard is rigid enough on your lap when both feet are firmly planted on the ground, it feels far more precarious if you cross your legs or put your feet up.

The iPad Pro and its keyboard cover isn't completely unsuitable as a laptop substitute. Although it's obviously still not as versatile as a desktop OS, new software features, such as the various multitasking features introduced in iOS 9, make Apple's mobile OS more capable and flexible than ever before. And third-party keyboard manufacturers have already started releasing their own alternative physical keyboards for the iPad Pro. But for the moment physical keyboards feel like a hasty afterthought for the iPad Pro.

Update: One of the most heavily marketed third-party Smart Connector-compatible iPad Pro keyboards is Logitech's Create. This keyboard case is similar to Apple's official accessory it completely envelopes the iPad Pro with the keyboard acting as a screen cover when not in use. Prying the iPad out of the case can be a real struggle, but at least it means it's snug and won't fall or slide out. 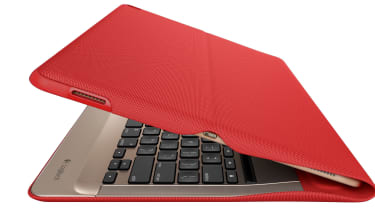 Although it doubles the iPad Pro's weight, the keyboard itself is far better to type on than Apple's. The keys are very similar to those found on a MacBook Air or MacBook Pro. They're big, backlit and have plenty of travel and feedback. The case itself also has a far stiffer plastic construction compared to Apple's keyboard case, so it feels more stable when you're pounding away. All this makes the Create a far more comfortable keyboard to type on, with faster results that are less typo-strewn.

It still has some of the same restrictions and design flaws as Apple's keyboard though. The screen is stuck at a single angle that some will find uncomfortable and the entire docked tablet can feel top-heavy too. 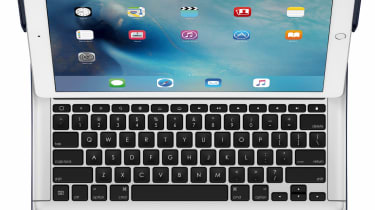 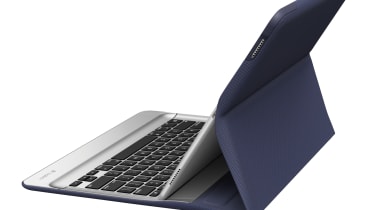 What it has in common with other iPads

Like other current generation iPads, the iPad Pro has a fingerprint sensor built into the Home button so you can quickly unlock the tablet and authorise ecommerce payments in apps that support it. As expected for Apple's Touch ID fingerprint readers, it was fast and accurate.

Although the sheer size and weight of this tablet makes it unlikely you'll use it as your main camera, it's good enough for use as a fallback option. Although low light performance was shabby, daylight landscape and portrait shots had reasonably good colour accuracy and exposure. Indoor shots tended to suffer from noise, but it's a decent tablet camera overall.

If you opt for the sole 4G-equipped variant of the iPad Pro (which is also the most expensive at 899), then the tablet will come with an Apple SIM already inserted. In theory, you should be able to have your pick of 4G suppliers and tariffs from the Settings app without ever having to swap out the SIM or ring a call centre. In practice, it's of limited use at the moment as only EE and pricey international pay-as-you-go supplier GigSky are supported in the UK. There's a wider choice in the US though, making it more useful for frequent travellers. 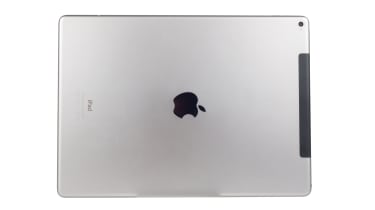 Uncharacteristically for an iOS device, one current stumbling block for the iPad Pro is apps. Outside of graphics apps, a lot of iPad apps look ungainly on the iPad Pro with either a surprising amount of empty space or fuzzy, upscaled text and other interface elements. We suspect this will change gradually over time as apps are updated to make use of the high resolution 12.9in screen.

The iPad Pro feels like Apple's most specialised and niche iOS device to date. The public's acceptance of this product may prove us wrong, but it feels unfinished as a potential laptop replacement. Plus it size makes it feel too ungainly for using typical tablet apps apart from specialised situations or if you have failing eyesight and thus benefit from the large screen. Where the iPad Pro really comes into its own is with the Apple Pencil - it's close enough to pen and paper to make it a must have for graphics professionals and budding artists alike.

Much like other similarly sized tablets, the iPad Pro isn't for everyone. But it definitely has its charms.

An excellent choice for artists, graphic designers and doodlers – a little more unbalanced and therefore not a perfect fit for everyone else