What's the difference between the Apple iPad Pro 9.7 and iPad Pro 12.9? 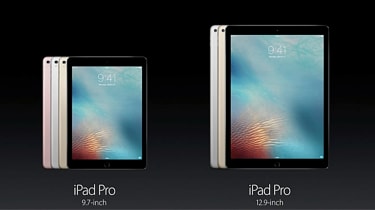 The iPad Pro launched as a tablet with niche appeal in 2015. It traded-away portability in favour of a larger screen and a Pencil accessory offering graphics tablet hardware to rival the professional Wacom Cintiq range.

Apple has now unveiled the iPad Pro 9.7 giving the Pro range far wider appeal while retaining compatibility with the all-important Smart Keyboard and Pencil range of accessories. There's more to the differences between these tablets that just screen size, though.

This 'unique' off-yellow version was donated to the Phillips art auction house, with proceeds going to the museum and it'll come with a special edition blue leather smart cover. This one-off will also includes an orange leather case for the Apple Pencil, which, if you're after a little more class, will include a gold band to add that extra exclusivity.

"He was winner of the museum's first Designer of the Year' award in 2003 for the iMac. To support the museum, he and his team in Cupertino have designed this special iPad Pro in a unique colour numbered Edition 1 of 1," he added.

If you're not ready to shell out for the 'unique' iPad Pro, the iPad Pro 9.7 brings the entry point down to a much more accessible level, but it remains more expensive than the standard' Mini and Air series. 499 inc VAT is the entry point for the 32GB iPad Pro 9.7, 180 less than the 679 for the 32GB iPad Pro 12.9. That gap stays the name no matter the model.

The original iPad Pro launched in September 2015 and the smaller version in March 2016. That six-month gap gave the smaller, more mainstream tablet a chance to improve in a few areas. 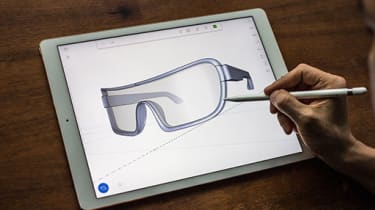 Despite being a significant departure from the iPad series in terms of function, the iPad Pro models both fit into the wider family like close blood relatives. They have aluminium shells that are sub-7mm thick and come in several colours.

The iPad Pro 9.7 also comes in Rose Gold too, while its larger brother only' comes in Space Grey, Silver and Gold. While both are tremendously portable compared with most 15in and even some 13in laptops, the smaller tablet clearly has a portability advantage and will be more convenient to use on a packed commute and other cramped spaces.

Both tablets have four speakers with a driver at each corner to deliver an appreciable sense of stereo sound and wide dispersal compared to other iPads. While previous Apple tablet speakers have offered comparatively good sound quality before, this improved soundstage is still a long time coming. iPad Air and Mini models use stereo drivers crowded around the Lightning port on the bottom edge.

These are sharp, high-quality displays. However, Apple has hugely upgraded its colour calibration ambitions with the iPad Pro 9.7, moving them in-line with the 5K iMac.

The iPad Pro 12.9 is calibrated to meet the sRGB standard, but the 9.7in tablet aims for DCI P3. That is a cinematic standard, while sRGB was designed in with monitors and printers in mind. The DCI P3 rainbow features far deeper shades, opening-up a much wider colour palette.

The smaller iPad Pro will have to have a superlative-quality panel, though, for it to have a chance of actually hitting 100 per cent of this standard - it's an ambitious gamut to aim for. This also means Apple has been working on the colour profiles of iOS  without this optimisation the iPad Pro 9.7 would look severely oversaturated.

The wide colour gamut will be of interest to graphics pros, as will the Apple Pencil. Both tablets can use this 79 accessory, used much like the stylus of a Wacom Cintiq to draw directly on the display with a high fidelity, pressure-sensitive response.

Many claim the feel of the Apple Pencil exceeds that of a Wacom Cintiq. App support is the main thing holding iPad Pros and Pencils back from wider pro use.

The newer tablet also features an improved anti-glare coating, with a claimed 40 per cent reduction in glare. The ambient light sensor has allegedly been improved in the 9.7-inch iPad Pro too. Rather than just sensing the light level, it also measures the tone of ambient light, letting the display alter its temperature to maintain a natural white balance in very warm or cool lighting. 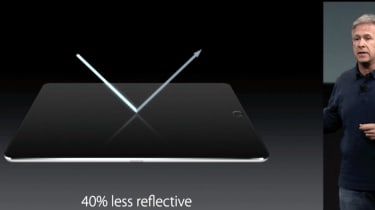 Certain elements of the iPad Pro have been improved in the 9.7-inch version, but its processor remains almost the same. Both have a dual-core Apple A9X CPU.

This is a 64-bit chip coupled with a M9 co-processor used to monitor the tablet's sensors while it is not in active use. It is believed the 9.7in has 4GB RAM like its bigger counterpart, but it's entirely possible it's 2GB like the iPad Air 2  Apple does not publicise the RAM specs of its mobile devices.

While these tablets start at a sensible 32GB, they can be configured all the way up to 256GB. The middle storage option is 128GB. The one difference is that Apple does not make a 4G, 32GB version of the 12.9-inch Pro.

The two sizes have different battery capacities with each tailored to the size of the display. The aim is to get the series-standard 10 hours of use in both. The iPad Pro 9.7 has a 27.5Whr battery, the iPad Pro 12.9 a 38.5Whr one. We'd expect the 9.7in iPad Pro to either match or come close to matching this claimed time the 12.9in version clocked in at nine hours and 44 minutes in our video playback battery life test. 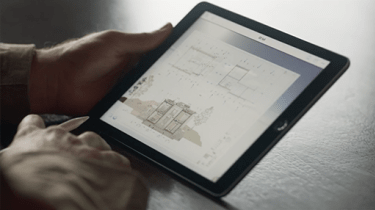 After years of using cut-down cameras in its iPads, Apple appears to be using the same hardware in the iPad Pro 9.7 as the iPhone 6s. It has a 12-megapixel rear iSight' camera with a five-element f/2.2 lens and a two-tone flash. It also has Focus Pixels', which are on-sensor phase detection points, letting the tablet focus more quickly in most conditions.

The iPad Pro 12.9 has a rather pedestrian main camera by comparison. It uses an 8-megapixel rear camera with an f/2.4 lens and no flash at all. Its sensor area only measures 1/4 of an inch, while the newer Pro has a 1/3-inch sensor.

It's a phone-grade sensor rather than a lower-quality tablet-grade one like the older 12.9-inch version.

The front camera is also much better in the iPad Pro 9.7, with once again the same-spec sensor used in the iPhone 6S, an 5-megapixel iSight camera. Apple has also added Retina flash support to the new model. This is where the display's backlight is temporarily boosted to act as a flash, missing from the Pro 12.9.

While only of use for handheld selfies, this style of flash will actually be more flattering than a regular front flash with a greater surface area of light helping to avoid hard shadows.

Most other hardware elements are identical, with no surprises. Both iPad Pros have 802.11ac Wi-Fi and their 4G models use nano SIMs just like Apple's iPhones. Even their Smart Keyboard accessories are similar, simply scaled to suit each tablet's frame.

The iPad Pro 9.7 makes the Pro tablet series much more digestible for the potential buyer not looking for something to replace a laptop or mimic the functions of a PC graphics tablet. Better cameras, a smaller frame and lower price mean it's a far less niche device.

Aside from the 9.7in Pro's improved colour gamut though, a great feature for graphics professionals after a portable design tool, the bigger 12.9in Pro will probably remain a better choice for most graphics professionals. The extra display size of the older iPad Pro is perhaps more valuable than anything else once the Pencil and Smart Keyboard are added to the equation. 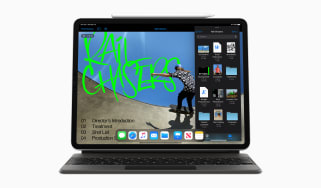