This hybrid is a decent tablet, but a mangled laptop 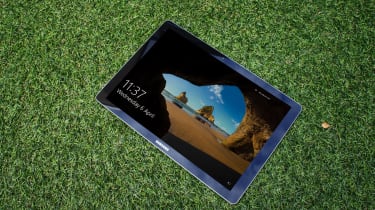 Samsung withdrew from the European laptop market several years ago, but it's now made a return in a small-scale, oddball fashion. The Galaxy TabPro S is a tablet that comes with a keyboard case, transforming it into a laptop. Despite the Galaxy name though, the TabPro S runs Windows 10 and not Android. While contentious, this is far from the biggest flaw afflicting this hybrid.

Although the TabPro S runs Windows instead of Android, it still looks similar to its smaller, Google-powered handheld relations. It has a dark blue coloured backing rimmed by metal with a gentle concave groove, so it resembles the Samsung Galaxy S6. It differs from its smartphone counterpart though in having a plastic backing rather than a glass one. Although it doesn't look as stylish, this is arguably more sensible in terms of weight.

As expected, the TabPro S is fanless as it uses a new Skylake-class Intel Core m3 processor, so your work won't be disturbed by the intrusive whirring of a fan. 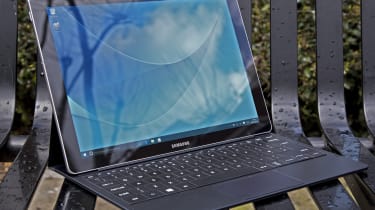 The TabPro S is reasonably light for a 12in tablet at just under 700g, although this does mean you're less likely to use it in bed and in the sofa. It's slender too, but it achieves its thinness and relatively light weight by leaving out what many find most attractive about Windows tablets in the first place full-size USB ports.

There's just a single USB-C port for charging as well as data transfer, wired peripherals and video-out when used with the appropriate adapters. This will be less bothersome if you've already moved over to cloud storage and wireless peripherals, but more inconvenient if you haven't. 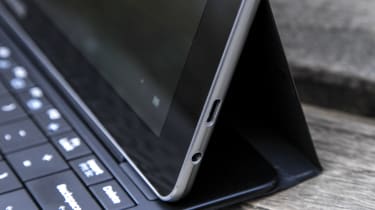 The weight of the TabPro S, as well as its girth, may make it less than ideal for casually consuming content at home, but the size and quality of the screen makes it well suited for editing and consuming content at work. It's exceptionally bright with excellent colour accuracy and contrast. The 4:3 aspect ratio means widescreen videos will have bigger black bars at the top and bottom, but the squarer shape makes reading and editing documents feel more natural.

Unlike the Surface Pro 4, the TabPro S doesn't come with a stylus the Bluetooth writing accessory is instead available separately. It's an odd omission, not only given the obvious utility for drawing and annotating documents but also because a bundled stylus is a given on the smaller Galaxy Note range of phablets.

A combined keyboard dock and screen cover is included with the TabPro S, but this is as much a curse as it is a benefit. The keys are large, but they won't be to everyone's taste as they have only a very shallow amount of travel. The keys do give feedback when pressed, but they rattle which feels unsettlingly odd and cheap. We were able to type accurately and at speed after a short adjustment period, but it's still a far from ideal keyboard. 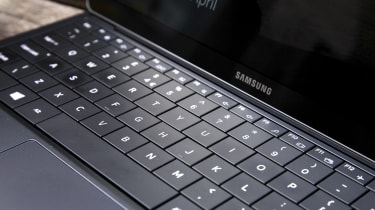 Even more problematic was the stability of the docking mechanism. Magnets attach the keyboard-screen cover to the back of the TabPro S, but you have to line the two up very precisely before the two latch together with a quiet click. Even then, the two will come apart very easily at the slightest jolt or movement. This is very easy to do, especially if you try to use it on your lap where it feels unstable. Plus, the entire thing prone to shaking if you have a heavy typing style.

Just as annoyingly, the screen can only be positioned at two different screen angles but the second one, which leans farthest back, proved to be especially unstable. Neither will be comfortable for everyone. The keyboard lies flat and can't be angled upwards like the Surface Pro 4's keyboard another limitation that will annoy many. 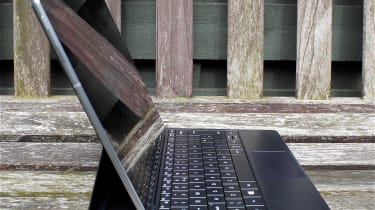 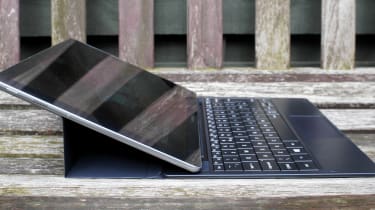 At least the touchpad is better. It's accurate and smooth, although its relatively small size makes pulling off some multitouch gestures more awkward than it should be. Plus, the keyboard cover does attach and pair magnetically with no need for Bluetooth.

The TabPro S is fanless, and thus completely silent when in use, due to its Intel Core m3 processor which is power efficient and thus less prone to belching out excess heat. The m3-6Y30 chip can turbo boost from 900MHz to 2.2GHz when necessary. Paired with 4GB of memory, it fared well for a tablet in our benchmarks. It won't completely replace your Core i5/i7 desktop or laptop if you also need to handle demanding jobs such as editing 4K video, manipulating RAW images and manhandling huge databases, but it's fast enough for everything else.

Battery life was merely okay, lasting just under seven hours in our tablet video playback test. While respectable, both the 12.9in iPad Pro and the Surface Pro 4 managed to last a couple hours longer. 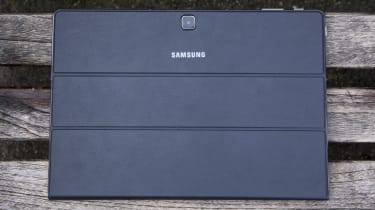 The Galaxy TabPro S is a decent Windows 10 tablet, as long as you're happy to live with the need for adapters if you want to use any wired peripherals. Its potential is somewhat hobbled though by the merely okay battery life and the absence of a stylus in the box.

The real kicker, however, is the keyboard cover. It's so bad that we wouldn't want to use the TabPro S as a laptop unless we literally had no other choice. This hybrid is therefore best seen as a tablet that can be used for very occasional typing. If you're hoping for Samsung's triumphant re-entry into the UK laptop market, then this deformed hybrid will dash those hopes.

A reasonably good tablet, as long as you’re happy with Windows 10 and USB-C, but a complete non-starter as a laptop replacement