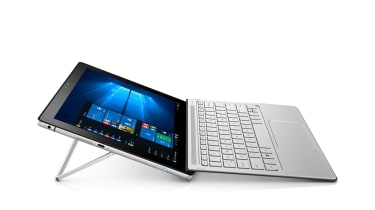 If you have trouble telling HP's various hybrids apart purely by name, then you're not alone. It's difficult to distinguish the similar sounding Spectre X2, Elite X2 and Spectre X360 from each other. There is some logic to it though X2' models are tablets with completely detachable keyboards, while X360' models are laptops with flexible hinged screens. Spectres are ostensibly aimed at consumers while Elites are intended for businesses.

The Spectre X2 stands out from its siblings if only because of its obvious resemblance to the Microsoft Surface Pro 4. This Windows 10 tablet has a pop-out kickstand and a detachable fabric-covered keyboard and screen cover both obvious homages to Microsoft's original design.

Flip out and take a stand

The Spectre X2 is well made and sturdy (albeit not as rigid as the Surface Pro 4), but it's not really lightweight which is no surprise for a 12in Windows tablet made out of metal. At 820g rising to 1.2kg with its keyboard screen cover attached, it's more likely to spend its time resting on your lap then held single handed or in both hands while out and about. 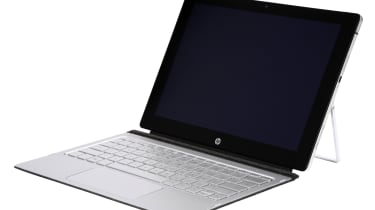 Despite its weight, it is slender but this involves its own set of trade-offs. It doesn't have a full-size USB port, but it does have two USB Type-C ports. These are used for charging and video-out, as well as for connecting wired peripherals, but you'll need to buy appropriate adapters for anything other than charging. 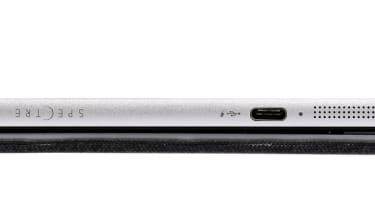 Unlike the Surface Pro 4, you need to pop a latch to release the kickstand. Although marginally inconvenient, it's hardly a disadvantage. The keyboard attaches magnetically and can be propped up at a slight angle an adjustment which makes typing more comfortable for some.

Despite the slenderness of the U-shaped kickstand, the Spectre X2 proved to be remarkably stable when used on a lap. It even coped reasonably well when we crossed our legs or ankles common usage scenarios which can literally trip up other hybrids. 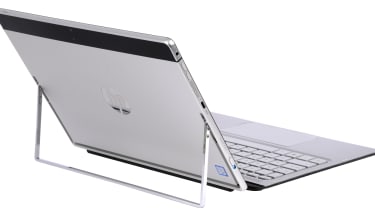 It's has ergonomic problems of its own though. The thick angular edges of the kickstand felt uncomfortably and conspicuously weighty on our legs. Getting a viewing angle on your lap that feels just right can be a little tricky too. 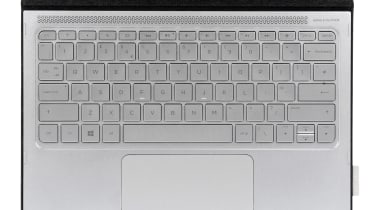 At least typing was fast and comfortable. The large keys have plenty of travel and feedback plus they're backlit too. The huge touchpad also worked well, accurately and smoothly tracking our finger movement and swipes.

If you'd rather write and scribble than type, you can use the included stylus. Although not quite as precise as the stylus for the Surface Pro 4, it's not far off drawing and writing felt natural and accurate.

The screen has a 3:2 aspect ratio which helps make sketching and note taking feel less awkward and cramped than it does on a 16:9 widescreen aspect ratio display.

The 1080p resolution is high enough for reasonably sharp text, while brightness and contrast are both respectably high. It's not the best display for serious graphic design work though. But colours look washed out and faded this so-so colour accuracy is disappointing.

Hello? Is it me you're looking for?

Although both the rear and forward-facing cameras are only just good enough for basic document scanning and video conferencing in good lighting, the forward facing camera does have the benefit of being a RealSense camera. In conjunction with the Windows Hello feature in Windows 10, it can recognise you by your face and log you in to Windows without the need for a password. It worked consistently well in our experience. 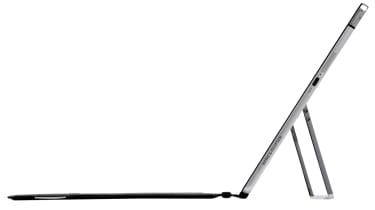 It's worth remembering that the Spectre X2 comes with the Home edition of Windows 10 preinstalled. This is less than ideal for most medium to large businesses as you can't opt out of Windows updates and you lose out on fine-grained MDM and Active Directory controls in the Enterprise edition.

The Spectre X2 comes equipped with a Skylake-class Intel Core m3 processor and 4GB of memory. It's by no means a speed demon and isn't suited for very demanding tasks, such as crunching huge databases or RAW photos. Even so, apart from occasional jitteriness in the Windows 10 interface, it was more than fast enough for everyday office work.

Battery life was merely satisfactory rather than exemplary. The battery lasted just under seven hours when playing video on a loop in our tablet battery life test. When scrolling through a long text document, the battery lasted just under 12 and a half hours. Neither of these scores are bad, but the best of the competition, whether laptop, tablet or hybrid, can last even longer.

Overall, the HP Spectre X2 isn't as good as the Surface Pro 4. From weight to wired connectivity and screen quality, it's good enough but nonetheless falls behind Microsoft's flagship tablet. None of this may matter though given how much cheaper the X2 is, especially once you include its keyboard/screen cover. The 200 effective cost saving is significant especially if you're deploying a large number of computers across your business.

Even then, we'd carefully consider whether you really want the X2 at all. Its combination of stylus and keyboard will make it suitable for those that flit between the field and their desks. But its weight and keyboard design means it's not as well suited for frequent business travellers and others who need to jot down notes while standing for long periods or those who'll find themselves needing to type on their laps.

Despite HP's promises then, this 2-in-1 isn't the no compromise do everything computer for everyone.

Cheaper than a similarly configured Surface Pro 4, but one too many compromises have been made to achieve its low price