This modular Project Ara-ish tablet comes apart at the seams 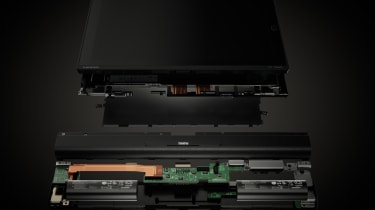 Lenovo clearly has a fixation on modular, upgradeable mobile devices. Its newly-acquired Motorola smartphone division is due to release the Moto Z, its answer to both Project Ara and the LG G5, later this year. The ThinkPad X1 Tablet is available now, but we found it to be distinctly underwhelming.

The ThinkPad X1 Tablet has the same timeless boxy black aesthetic as the storied ThinkPad laptop range, but it doesn't feel anywhere as well-made as its notebook cousins. The plastic casing flexed so easily under pressure, gaps opened up between the screen bezel and the rest of the chassis allowing us to peer inside at the components. Such poor build quality is shocking, especially for a tablet that costs this much and is aimed at professionals. 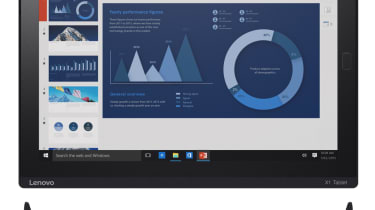 The wonky fit and finish extends to this tablet's modularity features. A small protective plate slides off the bottom of the tablet (when held horizontally), allowing you to attach optional modules (sold separately) that have extra features. Don't lose this protective plate though - without it you can't attach the included combo keyboard dock/screen cover unless you have a module that also has the necessary magnetic keyboard cover connector. A replacement protective plate cost a staggering 35. 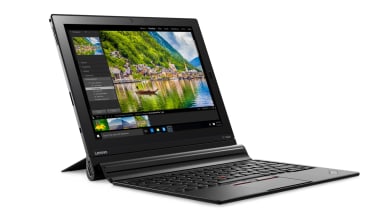 All this hassle might still have been worth it, except the available modules aren't especially impressive or compelling and there's no word if third-party modules will be available. The productivity module costs 139 and adds a second battery, a full-size HDMI port, a Lenovo docking station connector, a pass through magnetic connector for the keyboard cover and another full-size USB3 port to complement the one already built into the tablet. It adds an extra 200g of weight though, its vaguely cylindrical shape adds more chunky bulk, its docking latches are both fiddly to operate and the module needs to be lined up precisely to the slots on the tablet. 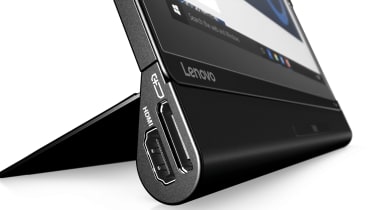 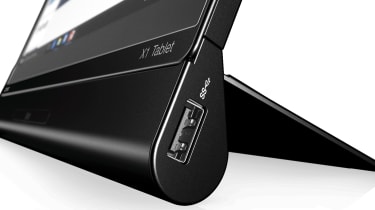 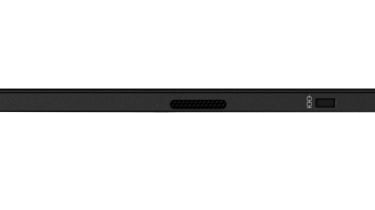 We've yet to see the presenter module in the flesh, but on paper this 361 add-on hardly seems worth it. Its 854x480 pixel resolution and puny maximum brightness of 32 lumens won't do your presentations justice and hardly seems any better than the standalone pico pocket projectors that have been available for several years now. 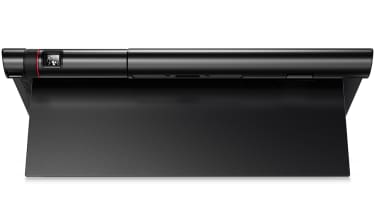 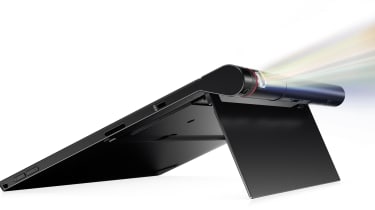 As expected for a 12in Windows 10 tablet, it's not especially light but it's no heavier than usual at just under 800g. The weight increases to 1.1kg with the keyboard cover attached. This is heavy for a tablet, but light for a laptop. At least it's not short of connections - 802.11ac, WiGig, LTE and Mini Displayport alongside a USB-C port and a USB 3.0 socket are impressive given this tablet's relative slenderness. 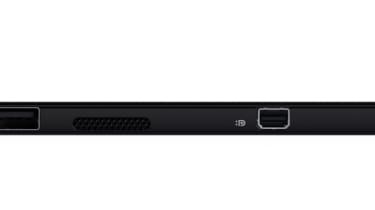 Lenovo has it covered

Lenovo has included a keyboard cover with the ThinkPad X1 Tablet. This small mercy shouldn't be overlooked, as Microsoft still obnoxiously refuses to include one as standard with the Surface Pro 4.

As with the keyboard covers on almost every other tablet-laptop detachable hybrid we've ever seen, the one included here is very much a mixed bag. On the plus side, the large backlit keys are excellent. While the keyboard here isn't identical to the excellent keyboards found on the ThinkPad and ThinkPad X1 ranges of laptops, it's very close with excellent levels of travel and feedback. There are only a couple of quibbles - a few keys are a little narrower than the rest, while the Fn key takes the Control key's usual place. 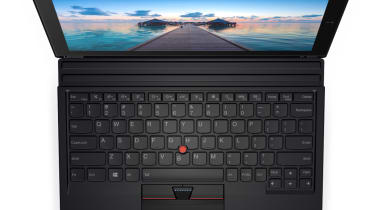 Although large, the touchpad's sense of inertia was often off, sometimes taking a little too long to accelerate or slow down the cursor in time with our finger movements. At least you can control the tracking speed of the touchpad separately from the touchstick; otherwise the latter can feel over sensitive and far too jittery.

A bigger, even more fundamental problem is the suitability of the keyboard cover and the tablet's built-in kickstand for use on your lap. Although very rigid by the standards of hybrid keyboard covers, it's still not quite rigid enough to prevent the entire computer from bouncing or flopping around on your lap when your legs are crossed and you're typing. It fared better with legs uncrossed, but the depth required by the tablet with the kickstand down, which is somewhat lengthier than usual as it's hinged at the bottom rather than at the top, means it's still awkward and fiddly to use if you're short and thus have a small lap. Or if you're working in cramped conditions, such as an economy class airline tray table. 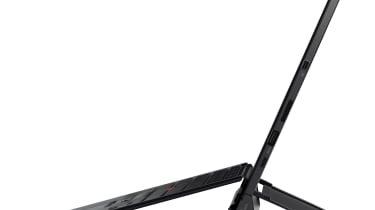 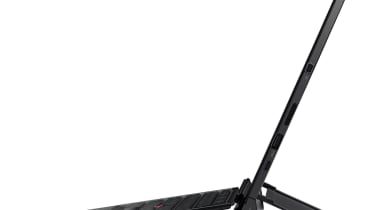 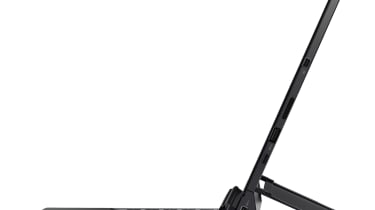 Like the Surface Pro 4, a stylus is included with the ThinkPad X1 Tablet. It's not as precise or as accurate as Microsoft's stylus, with a small but noticeable amount of lag present. It's still good enough for annotating documents and jotting down notes, but less so for very fine, precise artwork. 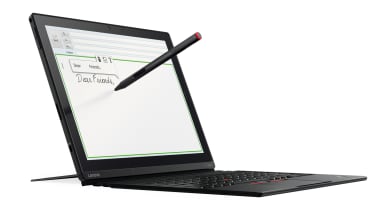 Styli are easy to lose, but Lenovo's stylus does come with plastic holder that plugs into the tablet's built-in USB 3.0 port for safe-keeping. Unfortunately, it's on the same side as the USB-C and Mini DisplayPort connectors, so the stylus can obstruct the use of these ports. It's not very elegant.

Our ThinkPad X1 Tablet review unit came equipped with a 1.2GHz dual core Intel Core m7 6Y75 processor. While fast enough for most office tasks, it's not as fast as the Core i-series processors found in other tablets, laptops and hybrids. Its lower performance enables it to run without a fan. However, given how uncomfortably hot the ThinkPad X1 Tablet became, even during mundane everyday tasks that shouldn't tax the CPU, it's clear that much more needs to be done to make it cool enough for comfortable handheld use.

Despite the power efficiency of the Core m7 processor, the small size of the battery ultimately doomed battery life. I managed just five hours and 43 minutes when playing video on a loop, with the productivity module only adding an extra three hours and 18 minutes. When browsing the web while connected to 802.11n WiFi, it only just managed five hours. The productivity module added another four and a half hours making for a more respectable total, but other tablets and hybrids can achieve similar run times without bulky, expensive add-on batteries. 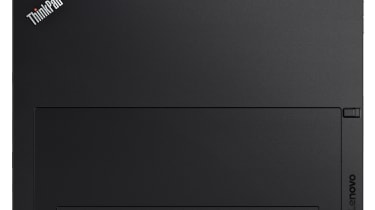 Lenovo has sensibly equipped the ThinkPad X1 Tablet with a 3:2 aspect ratio screen which makes reading and using the stylus feel more natural compared to a 16:9 widescreen. Windows copes well with the 2160x1440 pixel resolution as it's not too far removed from the more common 1080p and 2560x1440 resolutions. If it had been a 4K resolution, we'd have seen far more glitches in the way Windows programs appear on screen. Although image quality wasn't exceptional, it was still very good with high levels of brightness, contrast and colour accuracy.

Sitting just below the screen, when held in portrait orientation, is a fingerprint reader. It has more in common with the fast, generally error-free fingerprint readers found on modern smartphones than it does with the finicky fingerprint scanners found on older Windows laptops. Set up was quick and it recognised the registered fingerprint quickly with just a tap, rather than the slow and deliberate swipe that older laptop readers required. 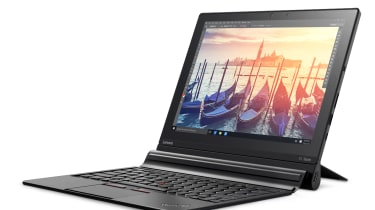 The Lenovo ThinkPad X1 Tablet looks great on paper, but the more time we spent with it the more puzzled and unconvinced we were by its flawed conception and design. The existing modules are finicky to dock, expensive and are of limited utility and thus questionable value. All of that should compel Lenovo to revamp its modular tablet plans, but doing so would show the lack of forethought and forward compatibility planning that Lenovo has put into the design of this tablet's upgradeable modular features.

Even if you put all that aside, this tablet is expensive, runs hot, has short battery life and a flawed keyboard cover and kickstand. Plus, while Windows 10 is a better balanced hybrid operating system than its predecessors, the available choice of touchscreen apps for it remains lacklustre. This, combined with the many legacy apps that most enterprises use, could condemn you to a workday of poking at tiny onscreen menus and buttons with the stylus rather than swiping and tapping away gleefully with your fingers.

The ThinkPad X1 Tablet just isn't very good. Lenovo needs to go back to the drawing board.