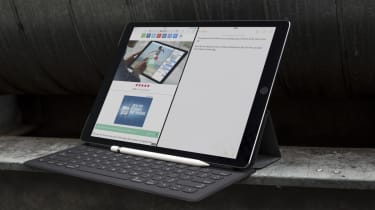 Apple has included its most powerful processor to date in the iPad Pro. The A9 chip found in the latest iPhones has been beefed up with an X, and iPad Pro also has extra RAM.

Whatever the stats, this is a tablet that feels consistently nippy and responsive. Even when editing video, even at 4K resolution, the iPad Pro didn't slow down. Tasks from video playback to side-by-side email and web surfing were swift and easy to accomplish.

Apple has said it's faster than many portable PCs, including some of the MacBook range, and the benchmarks seem to bear this out. A Geekbench 3.1 single-core result of 3,192 and multi-core result of 5,413 are significant improvements over the iPad Air 2.

We also ran the GFXBench Manhattan tests, which delivered results of 33fps for the onscreen test and 79fps for the offscreen test, run at 1080p. Again, these are seriously impressive results: faster than any Android or iOS tablet we've ever tested, and faster even than a mid-2014 MacBook Pro 13 equipped with Intel's integrated Iris Graphics 6100. 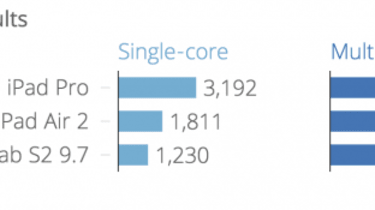 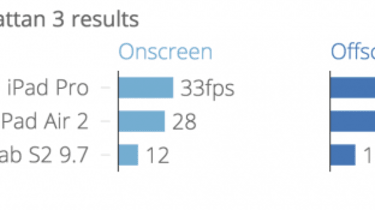 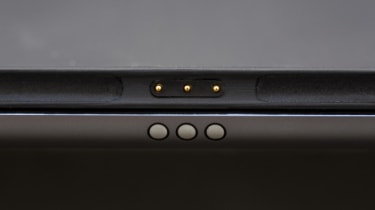 One of Apple's guiding principles has always been to avoid statistics, however, and focus on delivering a flawless user experience. And this is most certainly the case here.

The other critical component of performance for any tablet is battery life, and that's an area in which Apple's iPads have always been consistently good. At least, they usually hit Apple's claims. That's pretty much the case here. In our video-rundown test, in flight mode with the screen set to a brightness of 170cd/m2, the iPad Pro's 38Wh power pack lasted 9hrs 8mins. This may not look great when you look at the comparison graph below, bear in mind that all the devices below have screens at least 1.4in smaller than the iPad's. And 9hrs 8mins is no disaster by any stretch of the imagination. 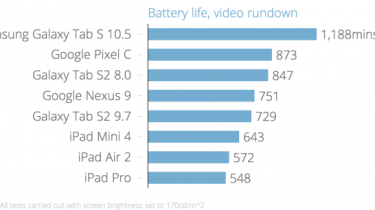 So, for a laptop-type product, that battery-life figure is actually pretty good. It will last you a full working day, and as always with Apple tablets, the iPad Pro won't lose charge when you put it in standby. This means that the next time you go to pick it up and use it, it will almost certainly have a decent amount of battery life remaining -- unless you've left it for weeks, of course.

Indeed, the only tablet for work I've seen recently that outstrips the iPad Pro for battery life is the Google Pixel C, which is in second place in the graph above.

The Apple iPad Pro is a stunning machine. It looks fantastic and, once you get over just how big it is, the size becomes a benefit, with its immersive screen and a giant playground of real estate for apps to exploit.

Add the Smart Keyboard or a rival setup and you have a creditable laptop alternative, with decent battery life and Apple's unparalleled choice of big-screen, touch-enabled apps. The Pencil adds a whole new dimension of usability and is a wholly enjoyable peripheral to use.

It is expensive: add it all up and you're spending more than 800 for the full set of tablet, Pencil and Smart Keyboard. But despite this, the iPad Pro is not bad value at all. For your money you're getting a fast, capable laptop running on iOS, and an eye-poppingly good tablet with ear-tingling audio to boot.

The iPad Pro marks another major inflection point: it ends the whole "iPads are only for consumption" debate. The only people who can't use the iPad Pro as a creation tool are those who need really high-end performance: professional graphic designers, professional video editors, the kind of people for whom 16GB of RAM is table stakes and who think nothing of going a lot, lot higher.

Most people don't fall into that category, though, and for those folks the iPad Pro is more than enough for a creation tool. For some -- anyone who sketches or loves using a stylus -- it's actually a better creation tool than the average PC or laptop.

Certainly, it's worth checking out the size and weight to see if they suit you. If not, it's definitely worth checking out the smaller 9.7in iPad Pro. This is very nearly as powerful as the full-scale iPad Pro and also supports the connection of a keyboard and Apple Pencil. That's a product that is undoubtedly better suited to carrying around in your rucksack. If the size of this 12.9in monster appeals, however, it's a tablet that's very hard not to like.