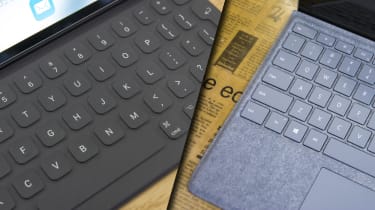 Apple has always been fairly consistent in its design of the iPad, landing on a hit format early on that has remained popular with fans. However, with the launch of the iPad Pro, Apple was keen to demonstrate that its humble tablet is capable of much more than browsing the internet and watching videos - that it has the potential to evolve from a companion device into a genuine laptop replacement.

With Apple having recently refreshed the iPad Pro range, we decided to put that claim to the test, pitting its 10.5in model head-to-head against another device gunning to replace your laptop, Microsoft's similarly refreshed Surface Pro.

Microsoft's fifth-generation Surface Pro is the most refined yet, having trimmed away most of the fat of the old models and made noticeable improvements to battery life and the detachable keyboard.

With both devices vying for the same thing - an audience that wants the functionality of a laptop paired with the portability and flexibility of a tablet - which one will come out on top? 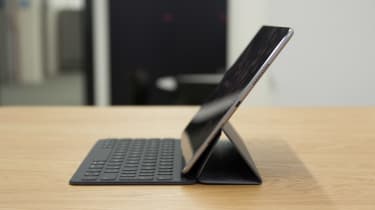 With the refreshed iPad Pro range, Apple is clearly attempting to attract the attention of business users while trying to take on the Microsoft Surface. Overall, the iPad Pro sports the same design DNA as other Apple tablets: there's the iconic home button, a curved frame as well as front and rear cameras.

However, by getting rid of some of the bezel found on the 9.7-inch model, the firm has been able to kit out the tablet with a larger 10.5-inch display. Compared to its predecessor, the screen's frame is only 10mm taller and 2mm wider. And with a weight of 469g, the tablet is slightly lighter, too. We reckon it's more comfortable to hold, as a result.

In comparison, the Surface Pro is far thicker and heavier than the 10.5-inch iPad. Because of this, you're going to find it harder to carry around. The Surface Pro has dimensions of 292x201x9mm, while the iPad Pro comes in at 250x174x6mm. As for weight, Microsoft's offering is 786g. Plus, without curves, the Surface Pro looks a lot chunkier than its main rival. 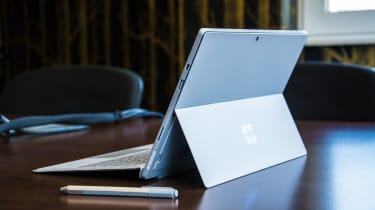 That being said, the Surface Pro doesn't fully disappoint. If you've got documents you need to access, or if you want to watch a film, you'll be happy with its built-in kickstand. Solid in design, the stand provides enough strength to hold the tablet in place, and without notches, movement is always smooth. You only need one hand to adjust it, as well. With the iPad, you have to rely on a detachable keyboard.

These are pretty hefty tablets, so a built-in stand does make a lot of sense. Microsoft has definitely trumped Apple in this respect. A physical stand not only makes using a keyboard more convenient, but a tablet that stands on its own also looks more appealing. Unfortunately, you have to rely on a fiddly - and somewhat weak - cover to prop up the iPad Pro. 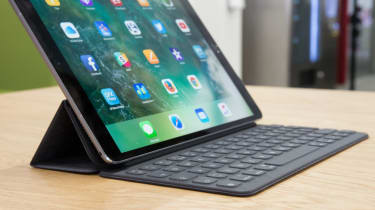 As is to be expected with Apple products, the iPad Pro boasts an excellent screen, offering superb viewing angles and an impressive 96% coverage of the sRGB colour gamut. The LED backlit Retina display features a 2,224 x 1,668 resolution, with an impressive max brightness of 528cd/m2 and an excellent contrast ratio.

Apple's trump card is the ability to set the display to 120Hz and have it automatically adjust refresh rates depending on the capabilities of the app running. It's a wonderful addition that not only makes the screen feel far smoother and more responsive, but helps to significantly reduce eye strain.

The Surface Pro's screen is similarly impressive, again offering wide viewing angles and an only marginally lower performance output to the iPad Pro. It does have a noticeably lower contrast ratio to the iPad, and side-by-side it can't quite match the deep blacks and bright whites of Apple's tablet. 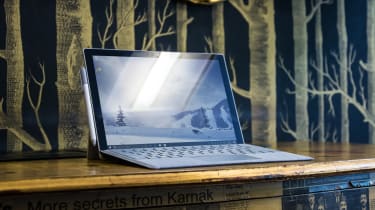 The biggest issue is that Windows 10 does not scale particularly well with higher resolutions. With many installed applications, including suites like Adobe, we frequently encountered text that was blurry or difficult to read, or objects that were too small. This was even the case with some Windows menus, like the device manager screen. Sadly this requires no small amount of tweaking to Windows 10 display settings, and even then it is an unreliable fix.