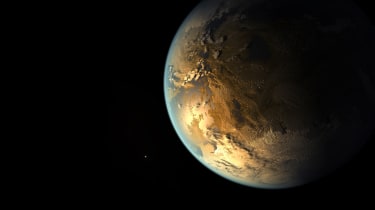 Of all the government agencies to make a major announcement, NASA's has got to be the most exciting. The space agency doesn't make banal announcements. If it warrants a press release, you can be damn sure it's worth our attention.

During the most recent NASA announcement, the space agency revealed it has spotted an eighth planet circling Kepler-90, a Sun-like star 2,545 light years from Earth.

The planet, dubbed Kepler-90i - was discovered in data from NASA's Kepler Space Telescope after being analysed by Google's AI. It is a "sizzling hot, rocky planet" that orbits Kepler-90 once every 14.4 days.

Google trained its AI to learn how to identify planets by searching Kepler data for instances where the telescope recorded signals from planets beyond our solar system, known as exoplanets.

The discovery of this eighth planet means our solar system is now tied for most number of planets around a single star.

"Just as we expected, there are exciting discoveries lurking in our archived Kepler data, waiting for the right tool or technology to unearth them," said Paul Hertz, director of NASA's Astrophysics Division in Washington. "This finding shows that our data will be a treasure trove available to innovative researchers for years to come."

The AI was trained by Christopher Shallue and Andrew Vanderburg to look for signals associated with exoplanets. This include changes in light readings recorded by Kepler as the exoplanets orbit their Sun. Tiny dips in brightness captured when a planet passes in front of, or transited, a star can be used to identify the planet, but also determine its orbit and size.

This was no mean feat, however. Kepler's four-year dataset consists of 35,000 possible planetary signals.

The AI was trained using a set of 15,000 previously-vetted signals from the Kepler exoplanet catalogue, and was able to correctly identify true planets and false positives 96% of the time.

Then, with the neural network having "learned" to detect signals, the researchers told their model to search for weaker signals in 670 star systems that already had multiple known planets. Their assumption was that multiple-planet systems would be the best places to look for more exoplanets.

Their research is published in The Astronomical Journal. Shallue and Vanderburg now plan to apply their neural network to Kepler's full set of more than 150,000 stars.