The 2018 tech trends to watch out for

Malware and GDPR mean CIOs must step carefully into 2018

As 2017 comes to a close, many will be breathing a sign of relief that the year of rampant malware attacks, data leaks, tightening budgets, and political uncertainty, is finally over.

Let's face it, it wasn't one of tech's best years. Ransomware attacks on the NHS, systemic industry sexism, and to top it all off, a lesson about encryption from Amber Rudd.

Just as it seemed 2017 would calm down as Christmas approached, news of two massive data breaches emerged, one at Equifax that involved over 143 million user records, and another at the circus show that is Uber - which became public despite an attempt to cover it up.

Next year will be slightly different. Some major shake-ups to data protection regulations and the rise of disruptive technologies are going to dominate the year, although there's almost certainly going to be two or three major data breaches thrown into the mix.

Given the pace at which AI and machine learning developed in 2017, it's highly likely that we're going to see more compelling use cases of the technology next year.

Magnus Jern, CIO of mobility services company DMI, says that AI investments will "heat up" over the first half of 2018, as more companies strive to improve the data that's being pumped into AI. "Virtually every app and service will incorporate some level of AI. Organisations are expected to continue investing in data scientists, in an effort to improve the quality of data before integrating it into AI projects."

What's more, AI has the potential to redefine how we build cybersecurity, as, according to Mark Barrenechea, CEO of OpenText, traditional firewalls won't cut it in 2018. "AI (in the form of machine learning) is being used to monitor networks and any associated devices for anomalies and report deviations in real time," says Barrenechea. "These emerging technologies are redefining cybersecurity as we know it. Moving forward, they will be our best line of defense against sophisticated cyberattacks."

However, it would be foolish to think that the technology being developed today will be only available to the good guys. Dave Palmer, director of technology at Darktrace, believes 2018 will be the year smart malware rears its head.

"Imagine a piece of malware that can train itself on how your writing style differs depending on who you are contacting, and leverages this nuanced understanding to send tailored, contextually relevant messages to your contacts," says Palmer.

"These phishing messages will be so realistic that the target will fall for them, downloading malicious attachments or following dangerous links. Such advances in AI will take us to the next stage in defenders vs attackers, and we need to be ready."

The damage caused by similar WannaCry or NotPetya attacks is likely to be far worse, as this style of self-spreading malware is ripe for automation.

"Cybercriminals go where the money goes: adopting this capability lets them infect a different magnitude of devices compared to past years," adds Palmer.

"2018 will see more of this - pairing automation with ransomware, spear-phishing, and IoT to effectively target a vast number of victims. No company is out of scope for malicious intent, even if they think they have nothing worth stealing." 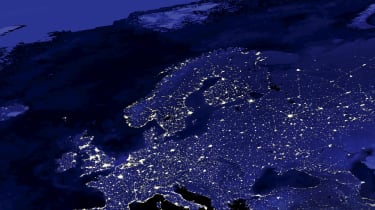 Everyone should have 25 May 2018 in their diary. The enactment of the General Data Protection Regulation (GDPR) will mark the biggest shake-up to data protection since the Data Protection Act. Every company will be affected by the rule changes in some way, and it will almost certainly cause an earthquake throughout the tech industry once it's here.

While the rules bring many changes, what will grab everyone's attention will be the significantly higher fines associated with non-compliance - up to 17 million or 4% of global turnover, whichever is higher.

As a result, we're going to see more companies taking greater care with their data, particularly when it comes to oversight, says Darren Abernethy, senior global privacy manager at TrustArc.

"With the GDPR taking effect amid an increase in global regulatory scrutiny from data breaches and new national laws, 2018 will be the year where companies understand their own data better than ever," says Abernethy. "Externally imposed imperatives to inventory and map a company's data flows from all jurisdictions and sources, will result in companies better categorising, monetising and decision [making] on their data."

Blockchain has become the cloud computing of future tech - a phenomenon that every technology company will soon want to be a part of. While 2017 was a great year for experimenting with the technology, 2018 will be the year it really shines - finally emerging from the shadow of cryptocurrencies to make an indelible mark on everything from finance to education.

That's not to say the likes of Bitcoin, Ether, Litecoin and the host of other cryptocurrencies won't have a shining year too, although the future of alt-currency is far from certain. As some analysts and financial authorities suggest, the bubble may soon pop, but it would be foolish to ignore the potential of digital currencies and their unprecedented surge in value which shows no sign of slowing down.