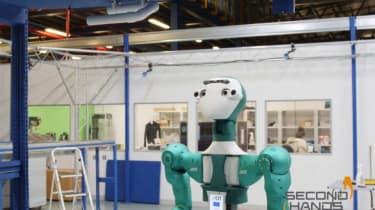 Online supermarket Ocado is looking to reduce its reliance on humans by rolling out a robot helper in its automated warehouses.

The EU-funded SecondHands robot prototype, named ARMAR-6, was developed at the Karlsruhe Institute of Technology (KIT) by Tamim Asfour and his team at the High Performance Humanoid Technologies Lab (HT) of the Institute for Anthropomatics and Robotics.

The bot has now arrived at the Ocado Technology robotics research lab, where it will be experimented on to test different features in a bid to improve productivity at the dozens of warehouses Ocado owns across the UK.

The robot will be able to pass spanners and move ladders to workers using artificial intelligence and speech recognition, the retailer's technology arm said.

However, the grocery firm believes the robot will not replace the need for human workers, but rather assist human engineers looking after Ocados handling systems by using AI to predict their needs, handing them tools they require, for instance.

The robot will listen to commands and interpret human reactions to decide how to help in different situations, a company spokesperson said.

"We are removing the physical labour but you will still need the human," they explained. "The idea is they work together and are more productive as a pair. [The] robot will be a second pair of hands that will assist technicians when they are in need of help."

Ocado, which delivers groceries for both Morrisons and Waitrose in the UK, said it is also working with experts at University College London, Switzerlands Ecole Polytechnique Fdrale de Lausanne and Sapienza University in Rome to further develop systems that recognise human actions and speech.

It is also currently building a robotic warehouse for French supermarket Groupe Casino as part of a huge international deal.