Engaging and immersive games could boost education, but there has to be a learning context 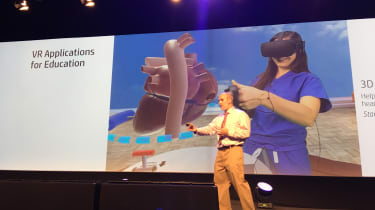 Augmented reality and virtual reality gaming can be used in education to provide a challenge for students and enable them to gain experience they wouldn't normally have, according to a scientist.

Speaking at the Bett Show, currently being held in the Excel centre in East London, Eric Klopfer, director of Scheller Teacher Education Program, The Education Arcade, at MIT, told delegates that in his research, he found gaming can be used for education as most students enjoy solving problems.

"Gaming is hard fun. Pleasant frustration is where the enjoyment of gaming comes from," he said.

But for educational games to resonate with students, they have to have multiple goals. They have to feature interesting decisions and these decisions have to have consequences. There should also be clearly defined goals, measurable feedback and a coherent system of rules.

In an educational context, Klopner said games should look at the whole learner as well as factoring in the social nature of learning in schools and colleges. The design of such games should also take the connection between learners knowledge, skills and practices very seriously.

"Resonant design honours the fact that knowledge and skills and the players we are trying to enchant and educate are all part of society, and are the relationships between players," he said.

He added that with virtual reality, games shouldn't focus on mimicking real-world things such as a virtual chemistry lab. Rather, they take students to places where they wouldn't normally go. One example was shown to delegates was a picture of a family caught up in conflict. Such games can teach about having empathy for others less fortunate but in safer surroundings. Another example of virtual reality in education was to show a 3D structure of the heart to teach people about heart defects.