AI will cause 'technological unemployment' 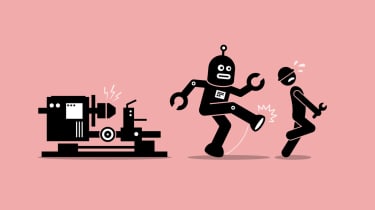 Artificially intelligent machines that have both cognitive and technical skills could cause massive and lengthy unemployment in the future.

This is according to the chief economist of the Bank of England, Andy Haldane, who has warned of the "dark side" of technological revolutions in an interview with the BBC's Today Programme.

Haldane said that an even greater number of new jobs will need to be created in the future to avoid the potential of a longer-term issue he called "technological unemployment", saying that the scale of job loss displacement is likely to be at least as large as that of the first three industrial revolutions.

"Each of those industrial revolutions had a wrenching and lengthy impact on the jobs market, on the lives and livelihoods of large swathes of society," said Haldane. "Jobs were effectively taken by machines of various types, there was a hollowing out of the jobs market, and that left a lot of people for a lengthy period out of work and struggling to make a living.

Haldane said that this "hollowing out" will be on a much greater scale in the future, where machines that can both think and do will replace both the cognitive and the technical skills of humans.

To counteract this impact, Haldane said: "We will need even greater numbers of new jobs to be created in the future if we are not to suffer this longer-term feature called technological unemployment.

"It has not been a feature of the past, but could it possibly be a feature for the future? I think that is a much more open question than any previous point, possibly, in history."

The pros and cons of AI have been debated for as long as the technology has been a concept and Haldane's comments match those from countless news stories that it will result in mass unemployment.

Recently, a report from PricewaterhouseCoopers (PwC) said AI would create as many jobs as it displaces in the UK, suggesting its effect would be felt disproportionately across different sectors.

Going further to the other side, Matt Walmsley, EMEA director at Vectra, believed the issue of AI's impact in the workplace is more complex and will ultimately be an enabler for people to take up new roles because of the technology's dependence on data.

"What we need to remember is that AI runs on data and that data belongs to people. AI is designed with a goal in mind and that goal is to assist people, not to replace them. This is because people and AI combined are more efficient and productive than either people or AI alone."