To reap the rewards technology has to offer we must change who we are, says astronaut Chris Hadfield 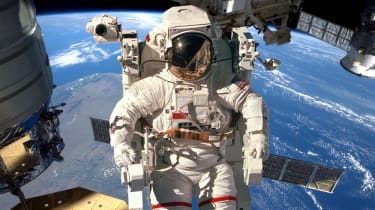 For technology to truly change our lives, we must take risks, accept failure and be audacious, says astronaut Chris Hadfield.

Speaking at the IP Expo for a keynote called 'An Astronaut's Guide To Life On Earth' Hadfield gave an example of when audacity had pushed technology, and ultimately man, to places unknown.

"Getting people on the moon took an audacity of change and an audacity of leadership," he said. "When John F Kennedy stood up in May of 1961 and said "We are going to put a man on the moon by the end of the decade and safely return him, not because it is easy, but because it is hard" the United States had an incredibly small amount of experience."

"It was actually 15-minutes of experience; Al Sheppard had left the earth, launched out of Florida, for 15-minutes and 26-seconds, going up and then coming down off the coast of the Bahamas. He hadn't even orbited the Earth. But on the basis of that 15-minute, 26-second space flight the President of the United States made a bold statement about taking new technology and changing everything."

And as history tells us, it did change everything. Hadfield is living proof of the change; a decorated astronaut with three launches under his belt, the first Canadian to undertake a spacewalk and from 2012 to 2013, he was in charge of a crew aboard the International Space Station.

During his time aboard he rose to fame with a YouTube video where he covered David Bowie's 'Space Oddity' - while floating around the space station. A music video shot on a space station sounds like an impossible dream, but as Hadfield pointed out, impossible is just a word.

"When someone sets an idea when the technology advances forward and the people apply themselves to try and push that transformation, it's incredible where it can take you and what you can see."

But forcing change can often come with risk and being an astronaut, where there is an extremely high level of risk, is in a space of its own for risk-taking. In order to reach the moon, several astronauts were killed in tests and failed launches.

For the crew of Apollo 11, Neil Armstrong, Buzz Aldrin and Michael Collins there was a risk at every stage. They were dealing with very experimental technology to go where no life had gone before. They were leaving their own lives behind, young families, for the benefit of mankind and there was no guarantee of return. 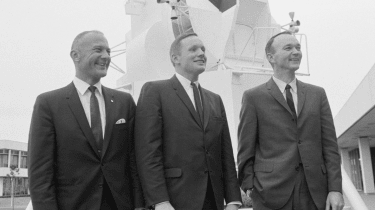 Failure was inevitable, because technology does fail, so they needed to be prepared for the worst. Upon landing on the moon, the Eagle capsule was supposed to have sophisticated technology to help it land on a safe area, but it didn't work.

"Neil Armstrong, he's not much to look at, he just looks like an unassuming guy from Ohio," said Hadfield. "But he had to grab hold of Eagle, get it under control and then manually find the place, that smooth spot, in the Sea of Tranquillity and lower it down, shut the engines off and say 'The Eagle has landed'," said Hadfield. 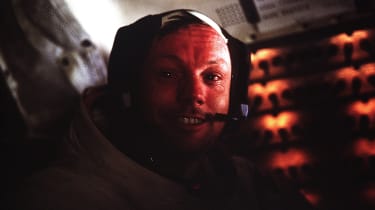 "When Neil shut the engines off, he had 16-seconds of fuel left, with a billion people watching over his shoulder. Somehow, he had turned himself into someone who could affect that sort of confident change."

From there it's a well-known tale. The most famous footprint in history. But what the Apollo 11 crew did was to change who they were, in order to allow the technology to do what President Kennedy had challenged it to do.