Microsoft explains why it still sells tech to the US military 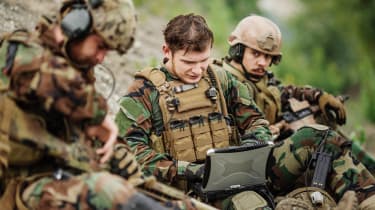 Microsoft has responded to criticism for its decision to continue selling technology to the US military, which has been opposed by its own employees.

Brad Smith, Redmond's president and chief legal officer, also defended its bid for the $10 billion cloud computing contract with the Pentagon, calling it "an example of the kind of work we are committed to doing".

The contract is being offered to one cloud computing specialist and has been widely criticised, both for seeking only one cloud provider and its ethical basis.

Despite rival firms like Google removing its bid for the contract sighting its morality, Microsoft has reaffirmed its commitment to providing technology to the military.

"Artificial intelligence, augmented reality and other technologies are raising new and profoundly important issues, including the ability of weapons to act autonomously," he wrote. "As we have discussed these issues with governments, we've appreciated that no military in the world wants to wake up to discover that machines have started a war.

"But we can't expect these new developments to be addressed wisely if the people in the tech sector who know the most about technology withdraw from the conversation."

Part of this conversation took place during a Q&A session with Microsoft employees. Smith, along with CEO Satya Nadella, laid out the company's three convictions for offering its services to the military.

Firstly, Microsoft said it believes in the strong defence of the United States and that it wants the people who defend it to have access to the nation's best technology, including its own.

Secondly, Redmond said it appreciates the important ethical and policy issues that AI is creating for weapons and warfare. Adding that it will use its knowledge and voice as a corporate citizen to address these in a responsible way through the country's civic and democratic processes.

Third, and most crucially given where some of its criticism has come from, Microsoft said it understood that some of its employees had different views.

"We don't ask or expect everyone who works at Microsoft to support every position the company takes," added Smith. "We also respect the fact that some employees work in, or may be citizens of other countries, and they may not want to work on certain projects."

The tech giant stressed that it gives the US military access to the best technology because it wants those who serve the country to know it "has their backs" but at the moment it's own employees don't seem to have Microsoft's back.