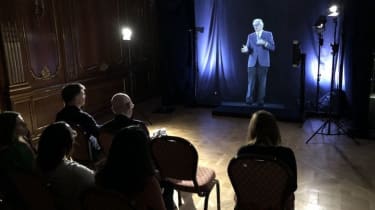 Although it could use video conferencing software to help students learn, it decided to instead use holograms that can be more interactive and "real" compared to a video stream.

The technology has been showcased at a Women in Tech event and the university now plans to roll it out in lectures for guest speakers, for example. It will first be used by the Business School, but other departments may opt to use it in future.

"The alternative is to use video-conferencing software but we believe these holograms have a much greater sense of presence," Dr David Lefevre, director of Imperial's Edtech Lab, told the BBC. "The lecturers have a high-definition monitor in front of them which is calibrated so they can point at people and look them in the eye. They can really interact."

During the Women in Tech beta test, two guest holograms were projected into the venue from the US - one on the East Coast and one on the West Coast - with an additional two "real life" pannelists. All four participants were able to communicate as if they were in the same room.

The technology is deployed using a glass screen that the participants' images are projected onto. Behind the glass, there's a digital backdrop powered by software to offer the illusion of depth. The participants are filmed using capture studio with a black backdrop while being lit from both sides.

Lefevre said it's a much more cost-effective way of generating a hologram compared to the more advanced methods used to project an image of a celebrity.

"It runs at the low thousands each time, so for the first time universities can afford it," Lefevre said. "It's going to be one of those technologies that gets used. So long as the technology works the way we believe it will, I can see this becoming fairly mainstream."

Imperial College will use studios in Los Angeles and Toronto to provide holographic lectures in future.