The updated hardware improves the rate of testing of AI applications 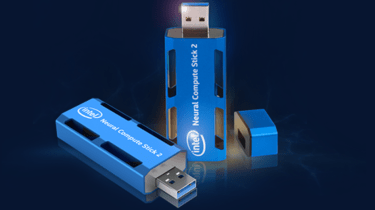 Intel has unveiled its second-generation Neural Compute Stick, a flash-drive-sized toolkit designed to speed up the development of IoT and edge device applications reliant on deep neural networks.

The thumb drive connects to a PC using USB 3.0, making it simple to set up and get creating AI and computer vision applications. They can deployed in minutes to Internet of Things (IoT) and edge device prototypes, without the need for any other hardware, because all the hard work happens inside the stick.

Once the applications are created, they can be ported to other form factors and turned into production applications using Intel's AI: In Production ecosystem.

"The first-generation Intel Neural Compute Stick sparked an entire community of AI developers into action with a form factor and price that didn't exist before," said Naveen Rao, Intel corporate vice president and general manager of the AI Products Group.

"We're excited to see what the community creates next with the strong enhancement to compute power enabled with the new Intel Neural Compute Stick 2."

The original Neural Compute Stick launched last year, following Intel's acquisition of processor business Movidius. The company claims it's been featured in more than 700 developer videos and has been the subject of "dozens of research papers".