And, it's not just factory and assembly jobs, the AI-driven cull could affect those in catering and retail too... 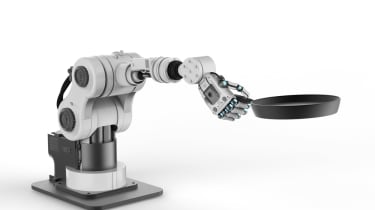 AI and automation will be more disruptive than we realise, according to a leading AI expert and author.

Some 40% of jobs could be automated within the next 15 years as the pace of AI has a greater effect than any technology before it, according to Kai-Fu Lee, author and venture capitalist.

Lee previously worked at both Apple and Google and earned a PhD from Carnegie Mellon, where he developed the world's first speaker-independent, continuous speech recognition system as his thesis.

Lee appeared on 60 minutes to discuss his new book 'AI Superpowers; China, Silicon Valley, and the New World Order' and went on to suggest that it's not just working-class, manual labour jobs at risk of automation.

When talking about the potential disruption caused by new technologies such as AI and automation, seemingly all commentators point to repetitive jobs such as factory and assembly line work.

And, given the advancements in self-driving car technology, truck drivers and anyone who drives for a living are also thought to be at risk of automation.

What makes Lee's comments stand out is that he also believes that some 'white-collar' work will be taken away from humans and replaced by AI or automation.

"Many jobs that seem a little bit complex, a chef, a waiter, a lot of things, will become automated," he said. "We will have automated stores, automated restaurants and all together, in 15-years, that's going to displace about 40% of jobs in the world."

There is nothing new about technological disruption, with inventions like the steam engine, the sewing machine, electricity and more all having a disruptive effect on jobs at one point in history. But, as Lee goes on to point out, we've gotten over these changes in society, which may not be the case when it comes to AI.

"The challenge of AI is 40%, whether its 15 of 25-years, is coming faster than the previous revolutions," Lee added.