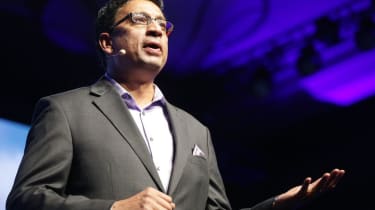 Blockchain? We've tried this, but it didn't pass proof-of-concept. 5G? It's exciting but won't make much difference for us. Artificial intelligence (AI)? Let's see how that goes for our customers first, but we're not at that point yet.

It's a similar story for many businesses trying to evaluate recent technology innovations, all of which have been anchored in varying degrees of reality and hype. Technology like 5G, for example, has been widely touted as a Godsend. Mobile World Congress (MWC) this year was flooded with 5G buildup, and handset manufacturers touting prospective benefits.

But even for global software giant Epicor, these technologies are still untested and offer very few real-world advantages for customers. For CTO Himanshu Palsule, 5G, in particular, will make no more than a "minimal" difference to Epicor's ERP portfolio, which spans more than 50 products, and when it comes to improving its internal processes, it will only scratch the surface.

"Any time the pipe's getting bigger and faster, innovation's going to get better from that," he tells us during a briefing at Epicor's customer conference Insights 2019. "But I don't see any radical changes to our stack or strategy as a result of it."

This point of view isn't just isolated to 5G, however; AI, AR, blockchain, the list stretches on and on. All of these innovations, and their wide-ranging degrees of success, have captured the imagination of industries in recent years, with businesses experimenting with adoption to varying degrees. While the rollout of 5G is becoming more of a reality, for many organisations, blockchain adoption remains a purely academic exercise.

We want to avoid technological 'overkill'

"Blockchain often gets misunderstood and confused with cryptocurrency, but that has nothing to do with it," Palsule explains. Just a day earlier, he revealed that Epicor had experimented with blockchain with the hopes of porting this into a tangible product. But these attempts ended in failure.

"The interesting part of blockchain for me is the distributed general ledger; the ability to get multi-party transactions in a secure route across all those different entities, and then summarise that back at the end," he tells IT Pro.

"First we researched the technology, the ability for us to take a single a single transaction, take a general ledger entry, have it broken down into parts and then come together. And yeah it's fast, it's secure, it's global, et cetera."

However, he explains that his company was unable to find "compelling use cases" for customers, and that ROI would be disappointing.

Palsule is personally excited by the technology, particularly with respect to multi-party authentication, and feels it'll evolve with time. But, he adds, it would be "overkill" to solve a problem that otherwise can be solved in ERP. This was rejected as early as the proof-of-concept stage because Epicor couldn't find a meaningful way of bringing blockchain to its customers.

And perhaps the businesses that Epicor serves, from manufacturing to lumber, are part of the problem too. While customers such as UK-based manufacturer Iracroft tell IT Pro they want Epicor to be forward thinking in their attitude to technology, many customers are still steeped in legacy infrastructure as well as legacy attitudes.

One area that Epicor has pushed far beyond any other has been the power of the public cloud, and more specifically the technological potential of adopting Microsoft's Azure platform. A host of new features in Epicor releases coming next month, including an AI-powered chatbot, will sit atop this underlying base layer.

But a significant chunk of Epicor's customer base will not only remain unconvinced, but will actively push back against this. They argue their businesses are running just fine with relatively older Epicor builds, and they hold a degree of scepticism around Epicor's embracement of cloud technology. When faced with the prospect of being forced into using a peer-to-peer technology like blockchain to support authentication, this frustration is likely to grow even further.

Ethics in AI will keep me up at night - if anything

But across these technologies, regardless of when, where or how they're implemented, the industry needs to keep a watchful eye on the unintended consequences that may arise. For Palsule, the ethical development of AI is at the crux of the issue.

"We as ERP vendors are abstracted enough that we don't worry about it today - because of what we do. But as we get into HMC [human capital management], we get into payroll, and we are not planning to do that anytime soon, the ethics of AI become very interesting because now you are guiding decisions.

"On the one hand they don't have a human bias, but on the other hand they have a huge algorithmic bias that cannot be easily changed. If you don't correct a bad algorithm, it's going to start creating patterns and biases that, by the time you find, could have led to a bad decision."

The likes of Microsoft and Google are wrestling with this ethical and morally-charged issue today. Google, for example, recently launched a disastrous AI ethics advisory board that became steeped in controversy. Microsoft, meanwhile, has repeatedly insisted any AI development it pursues in the future must be grounded in ethics, not long after its own AI-powered chat bot infamously became inseparable from the worst kind of internet troll.

On this front, Palsule leans more towards compliance and legislation than self-governance among the tech community, so long as this doesn't in itself block innovation.

"You put your hat on as a technologist and you want to move as fast as possible to solve complex problems, and then you put on your other hat as a business leader, and standardisation, and authentication, become important.

"Technology is moving at a great pace right now, so if you have to slow down a tad to make sure we're doing it for the right reason, that's great."