Britain must "wrestle with the force" of AI

DCMS sec: "The opportunities are far too great to be lost because as a society we could not agree on the right path" 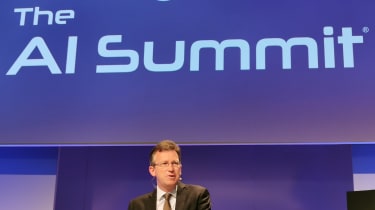 Britain must wrestle with the force of artificial intelligence (AI) and channel it for the greater good, according to the UK's government.

With the transformative power of AI set to change businesses rapidly over the next few years, secretary of state for digital, culture, media and sport (DCMS), Jeremy Wright said the country needed to channel the societal benefits of emerging tech and protect against those that want to use and develop it in a harmful way.

"The opportunities are far too great to be lost because as a society we could not agree on the right path," he said, at the AI Summit in London.

Wright called the UK "Europe's leading tech hub" saying it generates more billion-dollar tech businesses than any other country on the continent. But the Secretary for Digital said the true power of AI will be realised when it's more widely available.

"Technology is at its most powerful when it is no-longer novel but ubiquitous and cheap," he said. "And when technology drives down the cost of sharing and processing information, the consequences can be phenomenal.

"This is what is taking place with AI and the pace of change is only going to get exponentially greater in the coming years."

"The challenge for all of us is how the world wrestles with the incredible force of these new technologies and channel it for the common good," Wright noted.

Speaking about the government's attempts to get a firm grasp of AI, Wright brought up its Industrial Strategy, which he said had identified AI as one of four grand challenges.

AI is an area where the UK has the potential to lead the world for years to come, he said, because it has all the right conditions for success, such as world-leading universities, great access to finance and trusted institutions like the NHS, that can pioneer data-driven innovation.

Some may point out that despite having 'world-leading' universities, the UK is in the grip of a skills shortage and there are numerous reports of other countries, such as the US, attracting top talent away from the UK to tech hubs like silicon valley. Wright cited evidence in the form of the latest Tech Nation report that revealed UK tech job openings were at an all-time high.

With the number of tech vacancies in the UK set to rise, Joel Farrow, managing director of EMEA at Hibob, said that fast-growing companies need to offer a positive employee experience, culture and benefits to compete with the other roles that talented individuals are applying for.

"By being mindful of external data, such as Tech Nation's recent findings, and using their own internal data and systems, companies can ensure they are taking a holistic approach to find and retaining employees," he said.