IBM to go quantum in Germany 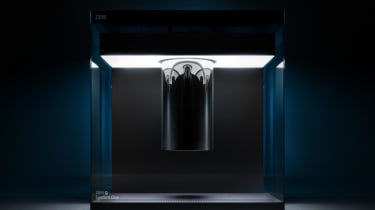 IBM has announced a partnership with a German research organisation to further the study and experimentation of quantum computing.

The German government is to invest 650 million over the next two years to push quantum technologies from initial research to market-ready applications.

The deal involves German-based applied research organisation Fraunhofer Gesellschaft and under the terms of the agreement, the US tech giant will operate its Q System One at an IBM facility in the country, with the aim of being a major hub for quantum computing research.

"This partnership is a landmark quantum computing initiative and a crucial step forward for German research institutions as well as businesses of all sizes in our country," said Professor Reimund Neugebauer, president of the Fraunhofer Gesellschaft.

"The installation of an IBM Q System in Europe is unprecedented and opens up the development of quantum computational strategies at the Fraunhofer Centre under full data sovereignty according to European law."

Quantum computing has seen billions of dollars worth of investment in recent years. As such, it is one of the fastest-growing areas of innovation in tech, despite being a relatively obscure subject. A basic description of it is extremely powerful machines capable of processing massive swathes of data due to a reliance on the theory of quantum mechanics in the way they are constructed.

IBM's German venture aims to unite prominent partners in research and industry under the roof of a Fraunhofer Competence centre. This will be operated and managed by the Fraunhofer Gesellschaft, which is already extensively active in the fields of quantum technology in fourteen of its institutes.

"This effort is poised to be a major catalyst for Europe's innovation landscape and research capabilities around quantum computing. This collaboration, as part of the IBM Q Network, will bring together European experts in a broad, active community of research partners to prepare the region for upcoming opportunities in the digital economy. Through this joint effort with Fraunhofer, we are ensuring the region is at the frontline of building the future", said Martin Jetter, senior VP and chairman of IBM Europe.

Unlike its German counterparts, the UK government's initial investment in the field was far less than the sector required, with only 80 million pledged for research in September 2018. According to the chair of the House of Commons Science and Technology Committee Norman Lamb MP, the National Quantum Technology Programme's (NQTP) strategic advisory board had asked for more than four times that amount to fund the second phase of its programme.