10 amazing DARPA inventions: how they were made and what happened to them

What is DARPA and what are some of the technologies it invented? Read on to find out more... 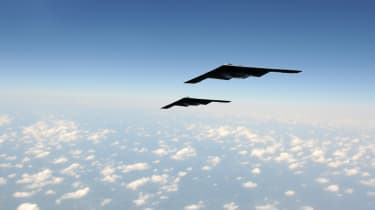 DARPA, or the Defense Advanced Research Projects Agency to give it its full name, is the source of some of the most important technologies upon which our society is built today.

Founded in 1958 as ARPA as a direct response to the launch of Sputnik by the USSR and the start of the Space Race, it’s a petri dish of experimental technology, much of which takes decades to reach to the civilian sphere – and when it does, there’s every chance most people don’t know it originated in DARPA at all.

Here are just 10 of the amazing inventions created by DARPA, how they were made and what’s happened to them.

Probably the best known invention to come out of DARPA is the internet. Indeed, if it weren’t for ARPANET, as the internet’s ancestor was known, you wouldn’t be reading this article right now.

The seeds of ARPANET were sown by JCR Licklider, a psychiatrist and computer scientist who in a 1963 memo to colleagues at ARPA described the concept of an “Intergalactic Computer Network”, where many computers are networked together. While he acknowledged some of the limitations of existing programming languages and technology to create such a network, Licklider managed to persuade fellow ARPA scientists Ivan Sutherland and Bob Taylor of the importance of developing the technology.

In 1966, funding was secured to create a computer network and three years later, ARPANET truly came online. It wasn’t until the creation of the World Wide Web at CERN in Geneva in 1990 by Tim Berners-Lee, thought, that the internet really started to explode from the world of research institutions and some businesses into the ubiquitous utility it is today.

When you’re punching a destination into a navigation app on your phone or a dedicated SatNav system and following its directions, you probably don’t give much thought to how it works. But the technology behind it has come a long way since it started its journey at ARPA.

The idea of using a constellation of satellites for navigation and tracking stretches all the way back to the 1940s, but the GPS project proper was launched in 1973. For the first decade of its existence, it was only available to the United States military, but when Korean Airlines flight was shot down in 1983 after accidentally straying into the airspace of the USSR, the technology was made freely available for civilian use. Today, it’s still the most widely used satellite navigation system in the world, although the EU’s Galileo satellite system, which went live in 2016, hopes to offer an alternative.

Even if you don’t know its name, you have almost certainly seen videos of BigDog, the quadruped robot created by Boston Dynamics. Throughout its history, DARPA has funded private enterprises to research technologies with potential military applications, and this unsettling, headless creature is one such effort.

BigDog was designed to carry heavy loads for military ground units travelling on foot and its four-legged build gave it stability, enabling it to navigate uneven terrain more easily. By all accounts, it was quite good at all these things, but it had one terminal flaw – it was too loud as it moved around, which in a combat situation could give away the location of the humans it was accompanying. And so BigDog has gone to live on a farm with all the other not-fit-for-purpose military dog robots.

If you thought a headless dog robot was strange, the research DARPA has done into insect sentinels is even weirder. In 2006, the organisation announced it was looking for researchers who would help it find a way to implant technology into an insect’s body while it’s in its pupa, thus turning it into a cyborg.

Successful entrants had to deliver the insect to within 5m of a target, using either remote control or GPS – and the results are predictably horrifying and somewhat impractical. While it’s unclear if DARPA ever learnt anything useful from the initiative and indeed one researcher told New Scientist he didn’t think cyborg insects would ever become fully-fledged surveillance instruments as it’s impossible to create a power pack that will run the electronics for a long enough time without also being too heavy for the insect to move while wearing it.

Some 13 years later, another call was put out involving insects, this time with the intention of creating conscious robots by mapping the creatures’ brains. In a January 2019 the agency published a brief for artificial intelligence exploration (AIE) proposals involving insects, explaining that their brains could solve the problem of how much energy and time it takes to train increasingly complex AI systems. It also touched on the fact these animals have subjective experiences, and that researching this particular aspect of insect brains “could lead to capability of inference, prediction, generalization and abstraction of problems in systematic or entirely news ways in order to find solutions to compelling problems".

The project has in the intervening year and a half become µBRAIN, which you can read more about here.

Moving away from DARPA’s creepier creations and investigations, it is also behind something we’re all familiar with – the graphical user interface, or GUI (pronounced ‘gooey’), and mouse.

This technology is almost certainly much older than most people realise, having been created by Douglas Engelbart in the 1960s, who gave the first public demo of the technology in 1968. It was rather more basic than what we think of as a computer interface now, but it laid the foundations for the desktop metaphor we use on our computers today, and the swipeable interface on smart devices.

Even if you’ve never used the Tor browser, you’ve probably heard of it – often in the context of cyber crime. But the technology behind Tor – which stands for ‘the onion routing’ – came from DARPA.

Research into onion routing, so named because every message sent is wrapped in layers of encryption, began in the mid-1990s at the US Office of Naval Research (ONR) with the objective of finding a way to secure US intelligence communications online. In 1997, it attracted funding from DARPA specifically focused on the robustness aspects of onion routing.

Research continued on the project, papers were published throughout the decade on various aspects of its development, and a working prototype of onion routing was created. In 1999, however, all work on it was suspended. This may sound nefarious at first, but in reality, the majority of principal researchers had left the ONR and no more funding was made available – that is until 2001, when DARPA resumed investment, albeit from a different funding pot than had been used in the 1990s. Ultimately, in October 2003, the Tor network was deployed and Tor code released under the MIT free and open license. Anyone can download it and start using it straight away, although don’t expect the Tor Browser to be quite as speedy as your regular browser.

The Human Universal Load Carrier is an exoskeleton intended to help soldiers carry a load of up to 90kg at a speed of up to 10mph.

Shortened to HULC (and pronounced ‘hulk’), the invention debuted on the public stage in 2009 and licensed by Lockheed Martin. Unfortunately, however, the project has been deemed a failure – while it works technically, it was found to restrict the wearer’s movements in some cases and actually increased the strain on muscles. Nevertheless, Lockheed Martin, which was HULC’s primary developer, is looking at other applications, such as using it as the basis of a wearable sensor array for soldiers or for medical or industrial applications in the civilian sphere.

Yes, that Siri. Apple’s digital virtual assistant started life as a DARPA project in the early 2000s, known as CALO – ostensibly an acronym for Cognitive Assistant that Learns and Organizes, but also a nod to the Latin word for a soldier’s servant.

The name is no accident, as the research that spawned it originally focused on providing better technology to soldiers in the field via a technology that could learn from experience, take instructions, explain what it’s doing and reflect on the experience it just had.

The CALO project lasted five years, from 2003 to 2008. Various technologies were spun out of it, including Siri, which was launched on the iOS App Store in February 2010 and acquired by Apple just two months later. Just over a year later, it was integrated into the iPhone 4s and is now a key part of Apple’s device ecosystem.

HAARP, or the High-frequency Active Auroral Research Program to give it its full name, is a scientific research station and magnet for conspiracy theories. Located in Gakona, Alaska, this joint project between the US Air Force, US Navy, DARPA and University of Alaska Fairbanks investigates the very highest layer of earth’s atmosphere, the ionosphere.

Work began on HAARP back in 1993, although the current facility dates from 2007. It uses high frequency radio waves directed at the ionosphere to glean insights both about the layer itself, but also the effects it has on radio communications and how to mitigate them. It’s also looked into other atmospheric events, though, like the creation of plasma trails by lightning.

The military withdrew from the project and the facility was shut down in 2014. While the original plan was to dismantle it, it was handed over to the University of Alaska Fairbanks completely, which now allows researchers to use it on a pay-per-use basis.

In the 1980s, DARPA, the US Navy and military hardware manufacturer Lockheed (now Lockheed Martin) came together to develop an experimental stealth boat.

DARPA was no stranger to creating stealth vehicles, having funded the creation of several stealth planes such as the B-2 Spirit bomber and F-117 Nighthawk fighter, which was also a collaboration with Lockheed. But this was the first attempt at creating a stealth boat that it had been involved in.

The result of the project was the Sea Shadow (IX-529), a twin-hulled ship that was described by Mercury News as looking like “Darth Vader’s personal yacht”.

It could hold a crew of 12 (plus a microwave, fridge and small table), and was seaworthy even in very rough seas. And while official reports are hard to come by, it seems it was also able to avoid radar detection.

But it was only ever an experiment and as such the Sea Shadow had probably the most ignoble end of all the inventions on our list, however. The US Navy originally tried to sell it to the highest bidder in 2006… only there were no bidders. Ultimately, the decision was taken to sell it for scrap instead and it was eventually purchased and dismantled in 2012.