The Story Behind Trump's Tech Tariffs

Who'd want to be the CEO at a US tech company these days? 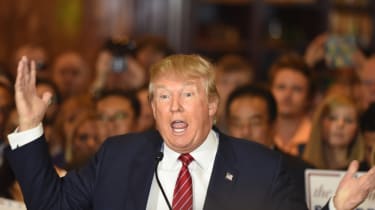 The last two years have turned many a hair grey in the C-suite, as economic uncertainty plagues the boardroom.

Among tech companies' many worries are economic tariffs. After a long period of globalism, the Trump administration has changed the rules. Trump was a hardliner on trade out of the gate, and it only took a year or so after he took office for the first tariffs to emerge under his America First policy.

They began with protective trade price adjustments on solar panels and washing machines, soon followed by steel and aluminium, hitting various countries. Trump signed a memorandum in March 2018 directly dealing with China, promising tariffs on products in several areas including information communication technology (ICT). China responded with tariffs on $3bn in US products, and the two countries kept escalating, adding more products to their respective lists.

The US' tariffs came into effect during July 2018, but these were only the beginning. Over the next 18 months, tensions rose. Technology companies got swept up in the growing trade war.

One group of companies hurt by the tariffs are those selling to China. The flow of products isn't unidirectional. Ezell says that 36% of US semiconductor sales go to China. China's retaliatory tariffs disrupt flows of those products into its own markets, hurting US manufacturers' exports.

Another set of companies hit especially hard are those that import their products and raw components from China, including the makers of PC and mobile hardware. The problem is the increased cost of important components or finished products eats into their margins.

In May 2019, just after Trump announced that he would increase tariffs on $200bn of Chinese products from 10% to 25%, Apple saw its shares fall by up to 9%, shedding around $75bn in market value. Tech companies have asked the White House to exclude them from the tariffs, worried about how much the economic measures would hurt their businesses.

The uncertainty introduced by the tariffs has an unsettling effect on supply chain continuity and sales. For example, in August the US government pushed back a 10% increase in import tariffs for products including cellphones, laptop computers, computer monitors and games consoles, from September 1 to December 15. That caused a rush on laptop imports in the fourth quarter as manufacturers tried to get as much inventory in from China as possible before the tariffs hit. The resulting inventory glut will lead to a weak import market in Q1.

Now, things have changed again. In late January, the US and China signed phase one of a trade pact designed to put a cap on the whole affair and walk back some of the damage. From a tech perspective, the standout was the indefinite suspension of the tariffs on some electronics goods that were due to hit on December 15th. It also halves the tariff rate on a list of $120bn in other goods including consumer electronics like Bluetooth headphones and flat-panel TVs.

The tech industry isn't out of the woods yet, though. An existing 25% tariff on a range of products remains, with the US suggesting that these will have to wait until a phase 2 agreement. These include electronic components like semiconductors and printed circuit boards.

The ITIF noted back in September 2018 that these 25% tariffs could hit cloud services companies hard because components like motherboards, memory modules, and cables are key to cloud service providers' success as they build out their infrastructure.

It also hurts companies like Intel, which faces costs of almost $1bn to move a semiconductor fab out of China. The company is already feeling the pinch as it struggles with shortages in its chip supply, so this adds another layer of complexity and uncertainty for the company.

The phase one deal doesn't remove the restrictions on many tech companies doing business in China. "You can't use Google Maps," points out Ezell, or indeed any other Google services, which are blocked in China. The country has also long shut its doors to Facebook. "So there's a whole bunch of digital industries, market access barriers and limitations that are still there to be addressed."

The phase one deal lumps cloud services in with a range of other industries including IP licensing, insurance, and tourism, rather than giving China a specific import target for this important part of the tech industry.

There are also broader issues that go far beyond the signing of this preliminary trade pact. China's Made In China 2025 initiative, created in 2015, aims for the country to become largely self-sufficient in several key areas over the next five years, with an emphasis on the high-tech industry.

Then, there's the national security angle. While China blocks companies from Twitter to Twitch, often as a way to censor content, the US also imposes strict rules on which Chinese tech companies can sell to or buy from domestic companies.

The most visible recent example is Huawei. Last May this Chinese IT heavyweight, one of the few companies in the world with the technology to build out core 5G systems, went onto the US entity list, which bans US companies from selling to it without federal approval.

Now, the US National Security Council has asked the Treasury Department to draft new rules restricting sales of any US technology to China, according to sources informing the Wall Street Journal. That protectionist move isn't a dead certainty by any means. The White House houses factions of trade advocates and anti-globalist hawks, along with a President whose next move no one can predict. Nevertheless, it further demonstrates the precarious nature of the trading relationship between the US and China.

Don't be fooled by the phase one pact. Tech companies and analysts alike have praised it as a step in the right direction, but when it comes to trade relations and their effect on the technology industry's fortunes, very little is certain.