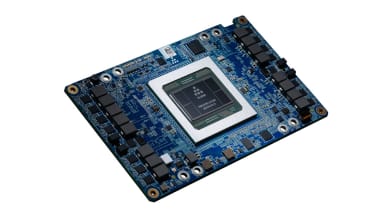 Intel is pushing further into artificial intelligence (AI) with the $2 billion (£1.5bn) acquisition of Habana Labs, an Israeli developer of deep-learning hardware.

In 2016, Intel bought Habana Labs competitor Nervana for $400 million, shortly afterwards scooping up computer-vision chip startup Movidius. In 2015, Intel bought reprogrammable chip maker Altera in 2015 for $16 billion. As of 2017, Intel said it had invested more than $1 billion in AI companies.

And it's starting to pay off, as last month Intel launched a pair of chips designed specifically for artificial intelligence in cloud environments, focused on training and inference using Nervana technology, as well as a computer-vision processing unit.

Habana Labs builds AI accelerators, which are a type of processor designed specifically for AI applications, such as machine learning or computer vision — they're what a GPU is for graphics, but for AI.

Habana will remain independent from Intel with the current management team remaining in place, and continue to be based out of Israel.

The acquisition isn't a surprise; Intel had previously invested in the company via its Intel Capital division. “We have been fortunate to get to know and collaborate with Intel given its investment in Habana, and we’re thrilled to be officially joining the team,” said David Dahan, CEO of Habana.

Habana Labs has two processor lines for cloud computing: the Gaudi and the Goya. The former is a processor designed for training AI systems. It's not yet available, but company data claims it beats Nvidia's equivalent on industry benchmarks, offers a 4x increase in throughput versus GPU-based systems, and Intel says the technology is already being trialled by some hyperscale customers.

The latter, the Goya, was released last year, and specialises in AI inference, when a trained system uses what it already knows about the world to make decisions, predictions, or otherwise analyse data, making them useful for the Internet of Things, for example.

“This acquisition advances our AI strategy, which is to provide customers with solutions to fit every performance need – from the intelligent edge to the data center,” says Navin Shenoy, executive vice president and general manager of the Data Platforms Group at Intel, in a statement. “More specifically, Habana turbo-charges our AI offerings for the data center with a high-performance training processor family and a standards-based programming environment to address evolving AI workloads.”