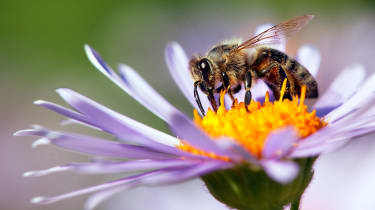 Next-generation drones could be powered by artificial intelligence software inspired by how bees adapt to and navigate their surroundings,

That’s because scientists from Sheffield University have demonstrated how they are reverse engineering bee brains to create a drone prototype that’s influenced by the flying insects’ ability to navigate accurately over several kilometres and learn environmental features on the fly to then find their way back to their hive.

Professor James Marshall from Sheffield University presented his team’s work at the American Association for the Advancement of Science conference in Seattle, detailing how they aim to create small drones that can effectively navigate their surroundings as bees do.

“Bees are really consummate visual navigators,” said Marshall, according to the Financial Times. “They can navigate a complex 3D environment with minimal learning very robustly, using only a million neurons in a cubic millimetre of brain.”

“For us they're at a sweet spot for brain size and intelligence,” added Marshall. Despite their tiny size, bee brains can multitask and they optimise the distances the bee flys from its nest to forage for nectar, meaning the brain learns and adapts to new scenarios very fast.

Currently, AI systems used for image processing can’t compute what they see any anywhere near as quickly as some of the smallest natural brains.

To try and replicate how bees navigate, the researchers have split the project, into two experiments.

The first involves attaching radar transponders to bees and analysing their flight paths so that the researchers can gain insight into their neural processes.

The second experiment involves the more gruesome process of inserting a tethered electrode into a bee’s brain and then observing its movements around a virtual reality environment. By analysing the neural signals, it is hoped the scientists will gain a deeper look into bee movements.

“We've modelled maybe 25 per cent of the honeybee brain, maybe a touch more,” said Marshall. “We have bee-like robots which can fly around lab behaving as a bee would, extracting information from the world.”

The researchers have two drones, one 600g model and one 250g; the latter is much bigger than a bee, but still rather small, yet can still hold all the computational equipment it needs to navigate like a bee, according to Marshall.

The project has been funded by a £4.8 million government grant from the UK research and innovation agency. That has meant the research is moving towards becoming a commercial venture, with a spinout company called Opteran Technologies aiming to eventually sell the AI software to drone companies and businesses, such as logistics companies that use drones for delivery purposes.

Not only does this research show there’s a healthy appetite for AI development in the UK, but it’s also a sign of the potential cutting-edge tech to come that will help fuel digital transformation doctrines in enterprises keen to use such AI technology.