Microsoft and IBM back Pope’s pledge for ethical AI 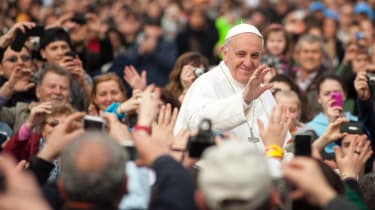 Microsoft and IBM are the first two technology industry sponsors of the Vatican’s principles promoting the ethical use of artificial intelligence (AI).

Pope Francis is set to release a document titled Rome Call for AI Ethics, which calls for privacy, transparency, and lack of bias in AI. The document will be showcased at a conference on AI ethics hosted by the Vatican’s Pontifical Academy for Life, as the conference comes to its conclusion, with the European Parliament’s president David Sassoli and Microsoft’s president Brad Smith in attendance.

The document, according to Reuters, states that technology should work without bias, respect privacy, operate transparently and reliably, as well as consider “the needs of all human beings”. It is a reflection of Pope Francis’ efforts to expand and adapt the Catholic Church’s teachings to current technological affairs.

On the other hand, IBM and Microsoft’s support showcased the growing support among tech giants to set ethical boundaries for the ever-changing and fast-paced world of AI - and its implementation.

IBM’s executive vice president John Kelly III, one of the pledge signatories, told Reuters that the Pope’s “major concerns were, will it be available to everyone, or is it going to further bifurcate the haves and the have-not’s?”.

IBM reportedly plans to involve doctors in helping guide healthcare decisions and recommendations made by AI. According to Kelly, IBM is faced with ethical questions of which about a third lack a straight-forward answer.

Both IBM and Microsoft said that, in the past, they were forced to refuse business deals when they felt uneasy with the way some clients were planning to use their technology.

Pope Francis had previously spoken about his concerns regarding AI at a Vatican conference in September 2019, saying that the “remarkable developments (...) raise increasingly significant implications in all areas of human activity”.

He also called for “open and concrete discussions” and warned Silicon Valley executives that “if mankind's so-called technological progress were to become an enemy of the common good, this would lead to an unfortunate regression to a form of barbarism dictated by the law of the strongest”.