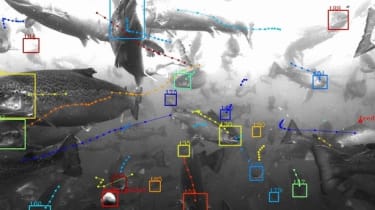 Google’s parent company Alphabet has revealed Tidal, a team in its X experimental division that will use the company’s artificial intelligence technology to help reduce human impact on the world’s oceans.

A major focus of the Tidal team has been centred on a system that uses image recognition to recognise and monitor individual fish in the hundreds and thousands that make up the population of fish farms.

Through the use of underwater cameras and AI-powered computer vision, the three-year project aims to better track farmed fish such as salmon and yellowtail, with the goal of cutting down the amount of manual inspection fish farmers have to do; such a process is said to be overly time-consuming, unreliable, and impossible to scale.

“Our initial area of focus is on developing technologies that bring greater visibility and understanding of what’s happening under the water,” explained Neil Davé, general manager at Tidal.vfg.

“After spending lots of time out on the water, we’ve developed an underwater camera system and a set of machine perception tools that can detect and interpret fish behaviours not visible to the human eye. Our software can track and monitor thousands of individual fish over time, observe and log fish behaviours like eating, and collect environmental information like temperature and oxygen levels.

“This kind of information gives farmers the ability to track the health of their fish and make smarter decisions about how to manage the pens - like how much food to put in the pens, which we hope can help reduce both costs and pollution.”

While this system should help fish farmers work more efficiently and help reduce pollution, a wider goal is to help make fish farming more sustainable, as Davé noted that fish not only feed some three billion people, but also have a “low carbon footprint relative to other sources of animal protein”.

This could then go some way to reducing the reliance of humans on animal protein from land-based mammals, such as cows and pigs.

The Tidal team is starting with fish farming but intends to also apply Alphabet’s technological clout to the wider ocean environment.

“As we validate our technology and learn more about the ocean environment, we plan to apply what we’ve learned to other fields and problems, with the help of ocean health experts and other organizations eager to find new solutions to protect and preserve this precious resource,” Davé concluded.

Such use of AI technology is an example of digital transformation pushed to the cutting-edge and used in environments where one would not normally expect the latest tech.

Similar work is also being done by researchers at the University of Sheffield’s, who are attempting to configure AI software to enable drones to navigate environments in the same fashion as bees.