Robots are already making some progress in healthcare settings, but they need more support if they're to make a real difference

by: Nicole Kobie
A robot porter in a hospital

After years of shrill reports predicting that automation would steal our jobs, those people working on the front lines of health, retail and transport during the pandemic could be forgiven for wishing they had a bit of machine help – or that their risky roles could be totally replaced by robots.

Robots have played a small role in battling the pandemic. There are stories of delivery robots doling out dinner to those under quarantine in China and telepresence robots interacting with patients in the US. In the Netherlands, one firm is pushing UV light robots as a way to clean hospitals. “That, to me, is very simple and easy to achieve in terms of robotics technology,” said Dr Ali Shafti, a research associate in the Brain and Behaviour Lab at Imperial College London.

But for the most part, across the UK and elsewhere, deliveries are done by couriers, treatment hand-delivered by nurses and doctors, and cleaning by janitors – all of whom are left at risk of contracting Covid-19. We’ve been promised driverless cars for years, yet dozens of bus drivers have died in London from the disease. Why were robotics and automation not ready in time for this outbreak?

According to a group of researchers in Science Robotics, the failure to achieve adequate automation to assist during the Covid-19 pandemic is down to a lack of funding and research focus. “The experiences with the Ebola outbreak [in 2015] identified a broad spectrum of use cases, but funding for multidisciplinary research, in partnership with agencies and industry, to meet these use cases remains expensive, rare and directed to other applications,” the researchers wrote. “Without a sustainable approach to research, history will repeat itself, and robots will not be ready for the next incident.”

There have been some success stories with medical robots. In the UK, NHS hospitals have long used robotics to aid surgeries, notably the da Vinci models and CMR Surgical’s Versius, both of which are still controlled by doctors. Some UK hospitals have also trialled the use of tablet-dispensing robots, porter droids to ferry about supplies and those clever UV-light cleaning bots.

Other ideas in use around the world include robotic ultrasound machines, which reduce the number of staff that are required for key diagnostic tests, exoskeletons for rehabilitation support and fluffy seal-like robots for socialisation. In Japanese hospitals, the Pepper humanoid robot is used to interact with patients, in particular to help reduce anxiety in children, while a lab has built a robotic bear to help lift patients, easing carers’ workloads. Those ideas sound impressive, but their use is sporadic and largely limited to trials.

The Hospital of the Future starts today

Technology has fundamentally changed the way we practice patient care

However, the technology is ready to go, explained Shafti. “The type of research being conducted right now in academia and in industry on robotics is well developed enough to be used in actual social care and healthcare,” he said. “And some of it is being used – but there is little effort on collaborative, multidisciplinary work aimed at actually getting [robots] in use. I personally believe there are many very good research projects working on great technology, but they’ve missed that last step of actually getting it out there and making use of it.”

To do that, the academics, startups and tech companies developing such ideas need more support from the government and health services, he adds. As social distancing looks likely to become the norm for months if not years, we need new ways to deliver healthcare safely. “That’s something robotics could really help with,” Shafti said. “It’s something we’re missing out on right now.”

With budget cuts and staff shortages, we shouldn’t need a pandemic to bring more robotics to the frontline of health. “I think all of this should have been deployed before any crisis was going on,” Shafti said, but adds that it’s understandable that the focus of the NHS has been elsewhere. “There are so many core issues within social and healthcare that moving to advanced technology becomes a later priority.” 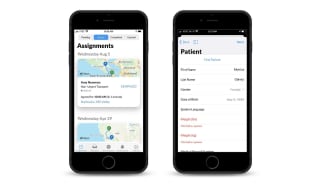