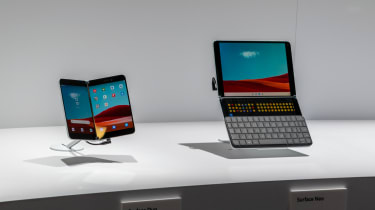 Microsoft has patented a set of cool systems that work to conduct heat through a flexible vapour chamber across the hinge used in 'foldable' devices like dual-screen smartphones and notebooks.

The company entered the foldables market last month when it unveiled the dual-screen Surface Neo and Surface Duo devices, but is already seeking to improve the performance and build of future iterations through a next-gen cooling technology.

Microsoft is planning to transfer the heat between regions of dual-screened devices through a vapour chamber which runs across the full span, feeding into a flexible hinge that can withstand repeated bending cycles, according to the filing.

"Examples are disclosed that relate to transferring heat between regions of a device connected by a hinge," the patent said.

The patent design for a cooling system in future Surface devices

In this example, the vapour chamber is coated with two layers of titanium, with these joined with each other to form the space through which heat can transfer. There will also be a working fluid within this space, as well as a third layer comprising features that are designed to conduct the working fluid through capillary action.

There are several other slight modifications of this technology that can be worked into devices of the future, with Microsoft now keen to enhance its portfolio with the recent additions of the Neo and Duo devices.

The patent design for a cooling system in future HoloLens devices

There are also patented variations that can be used in devices like the HoloLens, with the firm's quirky augmented reality (AR) headset almost certain to get a future revamp given the embryonic nature of the technology.

The HoloLens 2, for example, saw a number of improvements in the arrangement of internal components against its first iteration, given the hardware was largely frontloaded.

Given the scope for hardware improvements, and a boost in the time people can use these devices comfortably, next-gen cooling systems are highly desirable so as not to impair performance.