Augmented reality has been rapidly maturing. How will this technology transform businesses? 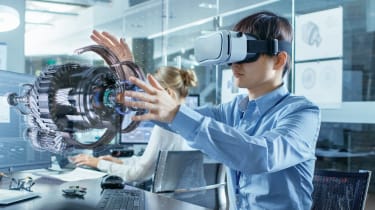 This article originally appeared in February's edition of IT Pro 20/20, available here. To sign up to receive each new issue in your inbox, click here.

Having the ability to access additional information via augmented reality (AR) is becoming more commonplace as businesses realise the advantages this can deliver. Enhancing what people see via smartphones, tablets and – increasingly – head-mounted displays (HMDs), has the potential to transform many business processes.

The business case for AR has been coming into focus over the last five years. Technologies such as the original Google Glass and Blippar were early pioneers. Today, AR has moved to mobile digital devices – Google’s AR maps for example and Microsoft’s HoloLens is making inroads into specific sectors most notably healthcare.

AR has quickly matured and is now finding practical applications in a wide range of industries including manufacturing, entertainment and healthcare. It is also actively used in the travel sector as an ideal technology for wayfinding at airports. In the cosmetics and fashion industries, where try-before-you-buy literally offers a new dimension, consumers can explore on a highly personal level. In the food and beverage sector, meanwhile, packaging is increasingly using AR to reveal detailed product content to support consumer purchasing decisions.

In a business process setting, AR is also changing how workforces approach tasks. Boeing, for example, is using AR in its production processes, where engineers can see wiring diagrams overlaid onto engines as they are assembled. The company claims moving away from paper drawing has cut wiring time by 30%.

DHL, meanwhile, has expanded its vision picking programme worldwide using Google Glass Enterprise Edition to locate and pick inventory. The company estimates its workers are 15% more efficient using the AR technology than they were without it.

According to research from IT services company Cognizant, 82% business leaders expect substantial AR-driven redesign of business processes in the near future.

Rob Brown, vice president, Cognizant’s Centre for the Future of Work, tells IT Pro: "Where technology has digitised previously repetitive, manual, and paper-based work processes, AR will take the next step by rewiring business process journeys to allow information to be exchanged while on the move. It will remove activities that involve checking information and toggling between multiple documents.

“Many businesses are already embracing the technology. Coca-Cola, for example, is using AR to help its retail partners visualise how drinks coolers would look in their stores; Caterpillar is reducing the significant cost of downtime by using AR for servicing its on-site portable generators; and Walmart is leveraging the technology for employee training,” Brown adds.

The ambitions that businesses from a diverse range of sectors have for AR and VR are only now being realised. Mobile digital technologies have caught up with the AR promise and can provide a technology platform on which to build AR services.

Industrial process augmentation is a growth area for AR that will continue to expand. Indeed, in its 2019 State of Industrial Augmented Reality report, software and services provider PTC found that where industrial businesses had implemented AR experiences, 69% of use cases were focused on benefitting their internal workers in engineering, manufacturing, service and training.

In its own report on AR, Seeing is Believing, consultancy PwC explained: “Many businesses are starting to recognise the opportunity to create new revenue streams and grow existing ones. Retail, hospitality and automotive are just three sectors already exploring the potential to sell and showcase products via both VR and AR, while gaming and entertainment companies are using the technology to create new experiences and products.”

Leila Martine, UK product marketing director of Mixed Reality at Microsoft tells IT Pro: “We have found that with AR, it is really important to start with bottom-up projects that quickly deliver ROI and impact into businesses. Alongside this, it's also important for there to be a strategic level of focus and investment to harness new technologies like mixed reality. A great example is the Airbus Holographic Academy in Toulouse. After going through initial [trials], Airbus realised the potential of mixed reality across their business and centralised a team to help Airbus look across their internal and customer-facing requirements and streamline this right into their business.”

The power of AR is that it can narrow almost any skills gap that may exist in a business and can also accelerate customer support in a range of scenarios. Maintenance situations, for example, have become the most conspicuous use of on-site and off-site AR. Increasingly though, business communications within and between teams will use AR when highly technical information must be assessed and acted upon.

Customer experiences are also on the cusp of being transformed. As high-speed 5G rolls out and the Internet of Things (IoT) delivers intelligent environments, products and services will increasingly become AR-enabled. The value to businesses is a closer relationship with their customers. For instance, Hidden Side from Lego can be played with without the need for AR, but the extra dimension AR delivers can be applied in countless other user scenarios.

Overall spending on AR and VR is expected to grow significantly over the course of this year and over the rest of the decade. In Seeing is Believing, PwC predicted the technology will add £62.5 billion to the UK economy by 2030, with the majority of that figure coming from investment in AR. This includes both internal use cases like training and on the job guidance (which is expected to impact almost half a million employees in this country alone), as well as customer engagement initiatives.

Speaking to IT Pro, Jeremy Dalton, head of VR/AR, PwC UK adds: “Smartphone AR will continue to exist alongside wearable head-mounted displays, especially as the consumer world is still a major force in the AR market.

“In the longer term, we can expect consumers to grow more comfortable with using head-mounted technology for AR features, but this will not totally eradicate the demand for smartphone AR. In the far future, once the technology effectively becomes transparent (think contact lenses), this will be the likely point where we see a phasing out of non-wearable AR.”

Whether AR is used to enhance end-user products, deliver detailed information for technically intensive manufacturing environments, or used to upskill workforces, it has precise applications all businesses can explore.

A clear development roadmap is critical to identify how AR could be applied and how AR services could be delivered. From simple solutions based on smartphones to more advanced implementations using HMD such as HoloLens or ThinkReality’s A6 headset, applying the right hardware and software will ensure high levels of ROI.

PwC’s Dalton concludes: “Augmented reality's future is an evolution of form and user experience – expect headsets to become lighter, smaller and more intuitive to use. Inevitably, as is the case with hardware in general, costs will also fall, further enhancing the investment case for organisations.”

The applications of AR by large firms such as Boeing, AutoDesk and Imperial College Healthcare NHS Trust grab the headlines as they are pioneering the use of AR in mixed reality environments. However, these large-scale programmes can seem out of reach for most businesses. AR, though, is scalable. Companies that can see how to improve an area of business operations either internally or externally can use AR today with reasonable levels of investment.