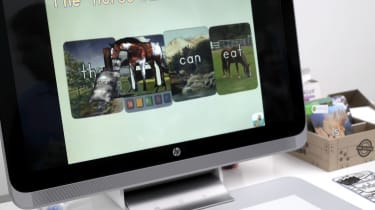 Top-end educational tech shouldn't be limited to wealthy schools in developed countries it should be spread as widely as possible.

That's according to Gus Schmedlen, vice president for worldwide education at HP, speaking on the sidelines of BETT 2017, describing HP's Learning Studios project that sees the 3D scanning computer piloted in sixty schools in 15 countries around the world.

At the end of last year, HP announced plans to expand that to include six more in Lebanon for Syrian refugees. "Everybody gets the same kit, everybody gets the same lessons," he said. That kit includes a Sprout, 3D printer, PageWide printer, and ten client PCs. The aim of the project is to cultivate early adopters around the world, rather than simply testing them in HP labs, with third-party, independent researchers tracking the impact of such technology in the classroom.

So why extend the trial to refugees? "First Syrian refugees will hopefully feel less of an impact from the negative circumstances that they're under," he said. "We also know that there is a schism that has happened in their lives, and the first thing to go isn't water or food, it's education."

Inspiring both the students and their teachers to get back into education is key, but beyond benefiting younger people, the studios will also help their parents reskill to find work in the digital economy. "By day, these studios will be for primary and secondary students on the borderlands of Syria," Schmedlen said. "At night, it's going to be to reskill and skill up adults whose careers have been changed or impacted by conflict. We're hoping we can use this prototype, in partnership with the UN High Commission on Refugees, to create more and smarter aid for education in emergencies."

Of course, that doesn't require a 2,200 computer with 3D capabilities and much more. Why not supply more computers that are a little less high tech? "We had a choice to make: do we provide dumbed down equipment or dumbed down kit something different than students on the International Baccalaureate in the US are using and our answer was a profound no," he said, adding it was a deliberate decision. "We want to give them the exact same opportunity. We want to honour the intelligence and abilities of these students in the exact same way."