With a stunning 13in full HD touchscreen, is this ultra-light 1kg machine a potential best friend for business users? 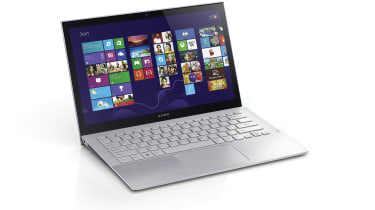 Sony could be forgiven by skimping on the components given the size of the Vaio, but it's managed to cram a Core i7-4500U processor inside. The chip used here is one of Intel's factory-fresh Haswell parts, and it's the beefiest dual-core, low-power part: it runs at 1.8GHz and, thanks to Turbo Boost, it'll dynamically overclock both of those cores to 2.7GHz or shoot one of them all the way to 3GHz. It's aided by 4GB of low-voltage DDR3 RAM and a 128GB SSD.

The Sony's application benchmark score of 0.62 is no different from the pace we've seen from Ivy Bridge-based systems enough grunt to handle work software, but not enough power for much beyond that. It's worth engaging Sony's Performance Cooling option if you need a little more juice: while the high-pitched fan is irritating, it improved the Vaio's benchmark score to 0.68.

The low-power Core i7 hasn't got room for Haswell's most powerful graphics core. Instead the Vaio makes do with HD Graphics 4400, which has a slightly lower base clock than the full-fat Haswell GPU. It scored 39fps in our Low-quality, 1,366 x 768 Crysis benchmark that's enough power to handle low-end and casual games, but that's it. 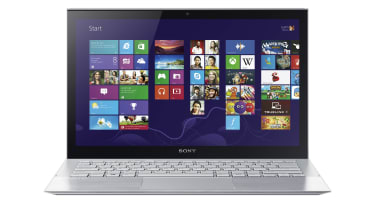 There's one area where Haswell makes a dramatic improvement and that's battery life. The Vaio Pro has a 4,470mAh power pack inside that can't be removed, but that's not a big issue when this laptop lasted for 10hrs 34mins away from the mains. That's not the only trick the Sony has up its metallic sleeve, though the secondary battery pack costs 80 and attaches to the underside of the device. Sadly, Sony hasn't provided a unit for testing, but it claims that the pack doubles the Vaio Pro's lifespan.