The business Windows 8 hybrid that almost gets it right 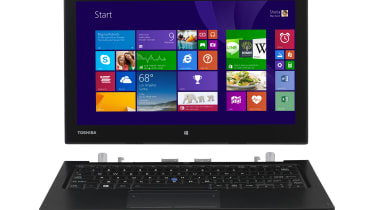 Numerous laptop and tablet manufacturers have been trying to make the perfect hybrid of both for years, with countless detachable and convertible portable computers flooding the market since the arrival of Windows 8. None have gotten the balance quite right, struggling with the competing and often contradictory design choices needed to make both a good laptop and a good tablet.

Toshiba gets tantalisingly close with the Portege Z20T, a Windows 8.1 hybrid aimed at businesses, but it's let down by a few niggling flaws.

The Z20T is available in a variety of configurations - versions with faster processors and more RAM and SSD space unsurprisingly cost more. All of the configurations use Intel Core M processors - the Z20T-B-107 reviewed here has a 1.1GHz Core M 5Y51, 4GB of memory and a 128GB SSD. 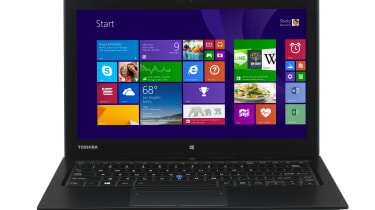 As a tablet, the Z20T weighs 730g which is about average for a tablet with a 12.5in screen. It's around a third thicker than the slender 10in iPad Air 2 at 9mm. It looks and feels chunky, but Toshiba has used this extra space to squeeze in some useful connections - a micro SD slot, a micro HDMI port and a micro USB2 connector. You can connect all your peripherals with full-sized USB plugs using cheap and widely available USB-On-The-Go adapters.

Although the 730g weight is hefty compared to much lighter 10in tablets, it's not too much of a strain unless you want to hold and use it single-handed for long periods of time. An even more noticeable problem is the 12.5in screen's resolution of 1920x1080 pixels. This pixel density of 176ppi is relatively low compared to both iPads and many Android tablets and the resulting coarseness in text is noticeable when reading.

This pixel density is still relatively high compared to most Windows tablets and laptops though. Windows 8.1 still struggles with it on occasion, especially when running older software, resulting in incredibly small text that's hard to read. This is far less common a problem with newer programs and almost non-existent with apps downloaded from Microsoft's app store.

A stylus is included for note taking and drawing. Toshiba claims it's pressure sensitive, although we found this to be crude at best. We were also disappointed to find that there's no built-in way of attaching the stylus to the tablet to ensure you don't lose it. It's still handy to have though, especially with neat touches such as the ability to assign a different brush stroke or other function to the eraser end of the stylus. 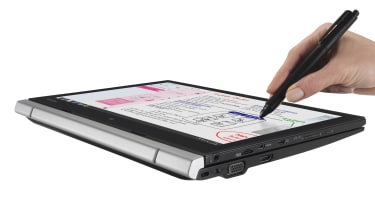 Core M processors are not only fast enough to run any of the tablets apps currently available in Microsoft's app store, they're also power-efficient enough that they don't need cooling fans or vents, unlike Intel's other Core chips. They instead rely on passive cooling which can lead to the Z20T's metal back becoming uncomfortably warm to the touch. Although this can be mitigated by fiddling with Windows' power settings, this is hardly in the spirit of the hassle-free post-PC ethos that tablets are supposed to represent.

At least the power efficiency of the 1.1GHz Core M 5Y51 pays dividends when it comes to battery life. The big battery lasted 12 hours and 5 minutes in our light usage test and eight and a half hours when playing H.264 video.

We also had no complaints about the thick bezels surrounding the 12.5in screen. Although these will look antiquated to some, this is a superficial complaint as they also make it far easier to hold and use the tablet without inadvertently touching an onscreen control. This is a common mishap on most tablets with far narrower bezels. It's a shame the tablet's casing isn't more sturdy - despite the metal backing most of it is actually plastic with so-so  rigidity, but it's not too flimsy. 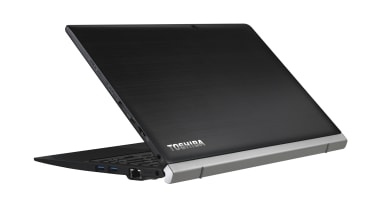 Connect the tablet portion of the Z20T to its included keyboard dock and it becomes a reasonably stylish-looking laptop. You can flip the tablet around and connect it backwards so that the keyboard dock becomes nothing more than a glorified tablet stand. It's not really designed to be used that way though, if only because the latch for releasing the docking mechanism is located on the hinge facing towards the keyboard and the keyboard itself is still active so you will have to take care to avoid inadvertently tapping the keys. 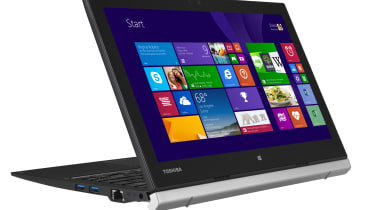 We did have some initial problems getting the docked tablet to recognise the keyboard dock - keyboard and touchpad input would frequently stop working inexplicably. This was very frustrating, but was almost completely resolved by installing a BIOS update via Toshiba's own software update utility. Although eventually fixed, we'd expect a higher degree of polish at this price.

Although the hinge only tilts back approximately 120 degrees, we didn't have any trouble getting a comfortable viewing angle, when used either on a desk or on our laps, apart from in the most cramped of conditions. This was due, in large part, to the relatively tall height of the 12.5in screen. 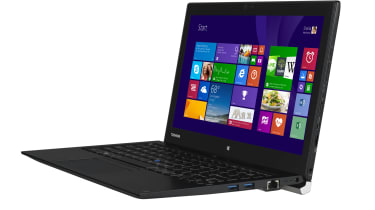 Although contrast and colour accuracy aren't quite as good as the very best laptop and tablet screens, it's good enough for all but colour-critical tasks. Plus, it's very bright and has a matte finish too which reduces glare caused by overhead lights reflecting off the screen. This occurs particularly frequently in offices with fluorescent lighting strips, so the matte finish is a very welcome feature. It's a shame matte finishes aren't more common, in hybrids as well as standalone laptops and tablets.

Squeezing 1920x1080 pixels into a 12.5in screen sometimes makes text a little too small to read comfortably though, especially as Windows continues to struggle with text scaling on such relatively high DPI screens.

We're used to seeing shonky, poorly designed keyboards accompanying tablets, but that's not the case here. The large keys have plenty of travel and feedback so typing was fast and comfortable. The hinge props the keyboard up at a slight angle, which makes typing more comfortable for some. The keyboard here is far superior to its counterparts on many of Toshiba's other laptops and hybrids.

Sadly, the touchpad wasn't as good. The touchpad's jerky motion meant it wasn't very smooth or accurate, while the buttons built into the bottom of the pad often require a firm, precise press. Gestures were often quite juddery too, especially swiping two fingers to scroll up and down. This is hardly surprising though; iffy touchpads are distressingly common on Windows laptops.

There is an alternative, aside from using the touchscreen, in the form of the touchstick. It'll be familiar to long-time Portege and ThinkPad users, but it won't suit everyone - like Marmite, you'll either love it or hate it. Even if you love touchsticks, its spongy buttons need improvement.

The keyboard dock adds more than just a selection of input devices. Its second battery almost doubled the Z20T's battery life in our light usage test, adding another 11 hours and 35 minutes and added almost nine extra hours of H.264 playback. Cleverly, Windows uses power from the keyboard's battery first so you can still use the Z20T as a tablet once the keyboard battery is depleted.

The big battery also adds some welcome heft to the keyboard dock so that the docked computer doesn't feel too top-heavy, a problem which afflicts many other detachable hybrids. The keyboard dock also adds a pair of USB3 ports, a full-size HDMI port, Gigabit Ethernet and even a VGA socket. The latter might seem antiquated, but is useful for connecting to the legion of old projectors that you're likely to encounter in conference centres and meeting rooms, while Gigabit Ethernet is a useful and faster fallback alternative to the built-in 802.11ac. 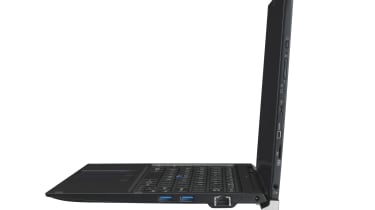 Although the Z20T is aimed at businesses, it oddly doesn't support vPro so you don't get the benefit of the Intel AMT-based way of managing your deployed Z20Ts even if they're turned off. Windows 8.1 Pro is pre-installed and, unsurprisingly for a touchscreen hybrid, there aren't any Windows 7 downgrade options.

Toshiba offers its own cloud-based MDM service, Toshiba Cloud Client Manager, for the asset and patch management of all your Windows-based devices. It requires a one year minimum contract and pricing is bespoke depending on your needs. If you already use a MDM product, then Toshiba Cloud Client Manager is unlikely to tempt you. If you don't already use MDM, then Toshiba's three month free trial is worth trying.

For physical security, there's a standard Kensington security slot on the keyboard dock. If you flip the separate lock switch to prevent the tablet from being disconnected, then attaching a Kensington security lock will not only secure the keyboard dock but also prevent would-be thieves from simply flipping the lock switch and removing the tablet portion.

The Toshiba Portege Z20T-B-107 comes close to getting right as a hybrid that's both a good tablet and a good laptop. But as tablet it's let down by its relatively heavy weight, heat issues and its inevitable reliance on Windows which has both benefits and disadvantages, such as extensive peripheral compatibility but a continuing paucity of touchscreen apps. Meanwhile, as a laptop, it's let down by its poor touchpad.

We might have been able to stomach these niggles if it wasn't for its steep price of 1000 ex VAT. At such a high price, we'd expect a great deal more finesse.

Close, but no cigar.