A tablet and Chromebook in one 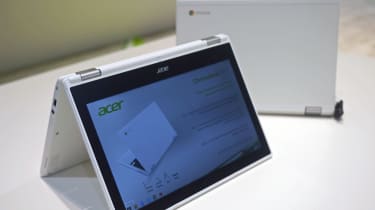 Even though ChromeOS isn't really designed for touchscreens, that hasn't stopped Acer for making the Chromebook R11. This is the first Chromebook convertible hybrid we've seen, changing into a full-on tablet.

The hinge can flip back just far enough so that the entire computer can be stood on end like a tent or just half way so that the keyboard acts as a stand for the screen. It's a mechanism first seen in Lenovo's Yoga series. These orientations are potentially useful for watching video or browsing through photos. It can also be bent far enough back that it lies flat against the underside of the laptop so you can it like a tablet, albeit a particularly thick and chunky one. Unsurprisingly, we found controlling certain parts of the ChromeOS interface to be very fiddly due to the small onscreen controls. 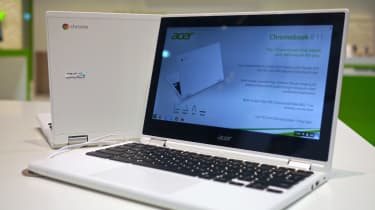 Aside from this somewhat unusual hinge, the Chromebook R11 is very similar to other ChromeOS laptops in the same price range. It weighs 1.25kg and comes equipped with 802.11ac. The 11.6in screen has a resolution of 1366x768 pixels which won't suit a lot of people. For some, that many pixels in such a relatively small screen will be hard to read. For others, it won't be enough and will make multitasking or using particularly complex apps with lots of controls, palettes and windows feel cramped.

We also found the screen to be quite dim. Sadly, this is the norm for cheap Chromebooks rather than the exception.

The plain plastic casing will be available in either black or white, but the pre-production units we saw at Acer's IFA booth felt very cheaply made and bent and creaked alarmingly under pressure. At least the keyboard felt comfortable and responsive in our brief hands-on time with it.

The Acer Chromebook R11 will cost 229 when it goes on sale in the UK from mid-October. 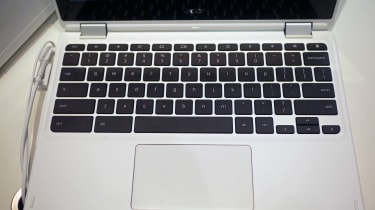