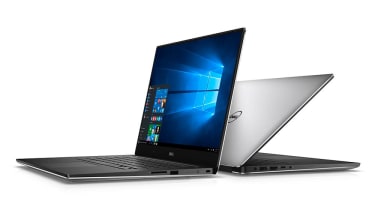 Dell has updated one of its most popular ultrabooks, the XPS 15, to include Windows 10 and Intel Skylake processors.

A much-loved laptop among business users, the older XPS 15 has been praised for its excellent display and easily-upgradeable hardware. Dell has taken that feedback and ran with it, creating a machine that's beautiful both inside and out.

Dell is really pushing the improvements in the user experience for this iteration of the XPS 15. The most immediately noticeable evidence of this is the InfinityEdge' display, Dell's edge-to-edge screen.

Produced in partnership with Sharp, the 15.6in panel has virtually no bezels, which not only makes it seem enormous but also looks exceedingly snazzy, ensuring that nothing distracts from the screen. This is helped by the fact that it's got a matte rather than glossy finish, drastically reducing the amount of screen glare when used in direct sunlight.

It's available in 1080p or 4K resolutions, with the 4K version also offering multi-touch support. The 4K version, in particular, looks gorgeous, and while such a high resolution is a tad unnecessary for some people, it's undeniably attractive.

The XPS 15 is just as good-looking on the outside too. Like the previous model, the clamshell exterior is all brushed aluminium and rounded corners. It looks incredibly sleek and bears no small resemblance to Apple's line of MacBooks.

Thanks to the aforementioned Infinity display, Dell claims that the XPS 15 is now "the smallest 15-inch laptop on the planet", with 17mm/357mm/235mm (WDH) dimensions and a minimum weight of 1.78kg. According to the company, it's 5 per cent smaller and 13 per cent lighter than the 15in MacBook Pro.

It's certainly visually appealing and feels both light and sturdy. We're pretty confident that you could hump this around in a shoulder bag all day without feeling any undue strain. It's also impressively compact given the large screen. 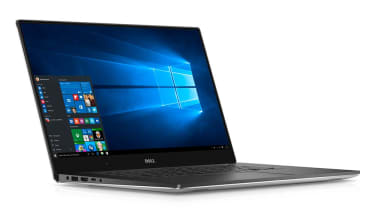 While the exterior has been pared down, the internal components have been beefed up. The XPS 15 has had an update to Intel's 6th-generation i3, i5 and i7 Skylake CPUs, and runs Windows 10 straight out of the box.

The RAM isn't too shabby, either. Upon first release, the maximum amount will be 16GB, but that's set to rise to 32GB in January, as compatible DDR4 DIMMs become available.  Also available is a maximum storage allowance of 1TB, through either hard disk drive or SSD. HDDs can also be supplemented with an additional 32GB of flash storage.

Possibly one of the most interesting things about the XPS 15 is the option to include a Nvidia GeForce GTX 960M graphics card with 2GB of onboard graphics memory. Rather than targeting gamers, this is targeted at graphic designers and 3D modellers, who need lots of GPU horsepower for intensive rendering.

Dell claims that certain configurations of the XPS 15 can last for up to 17 hours on a full charge, which is a great battery life if accurate. However, we'll have to wait until we can get it in for testing before we confirm it.

One other feature that Dell is touting is a Thunderbolt 3 port, which can be used for charging, power-sharing and data-transfer. Although the XPS 15 will only include one Thunderbolt 3 port, in addition to the two existing USB 3.0 ports, it forms a great connectivity suite.

The XPS 15 is available today via Dells' online store, with prices starting from 915.83 ex. VAT for the basic configuration. More detailed pricing information has not yet been available but based on prior experience, users can expect to be paying upwards of 500 extra for some of the more sophisticated configurations.

All in all, the Dell XPS 15 looks like a fantastic business ultrabook and a great addition to the XPS range. It's elegant and professional-looking, powerfully specced, and fitted with a breathtaking display. The only slight drawback is the slightly eye-watering price, but if you're willing to stump up the cash, the XPS 15 looks like a very solid bet.