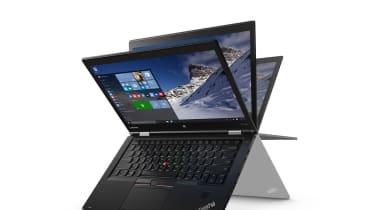 Naming IT products can't be easy, especially if you're a storied manufacturer such as Lenovo in an industry where all the obvious names have long since been taken. Even so, keeping track of Lenovo's numerous Yoga-branded convertible hybrids is a headache. There are the ThinkPad Yogas which are aimed at businesses and run Windows, with the exception of a lone ThinkPad Chromebook Yoga. Then there are the consumer Yoga Windows laptops, all suffixed with a three digit model number, such as the Yoga 700. None of these should be confused with the Yoga line of Android tablets which are just tablets, and aren't hybrids at all, or the Ideapad Miix range of detachable Windows hybrids aimed at consumers.

The Lenovo ThinkPad X1 Yoga muddles this morass even further by adopting the X1 name which had previously been reserved for the company's flagship ultra-portable laptops. This puts extra pressure on this Windows 10 hybrid to justify its high cost - the specification reviewed here costs 1383 ex VAT (1650 inc VAT). This is pricey, even by hybrid and ultra portable standards, with even more costly versions.

Like the older and cheaper ThinkPad Yoga 260, the X1 Yoga has the classic and sturdy plain black ThinkPad casing. It's tough yet slender. The now familiar double-jointed flexible hinge means you can flip the screen over so it lies against the back of the laptop and use it like a tablet. Cleverly, when in tablet mode the keys recede into their holes. The surface then feels almost flat to the touch, so you don't get the odd sensation of keys moving while hold the tablet as you do with other similarly double-jointed convertible hybrids. You can also orient the keyboard so it acts as a stand for the touchscreen. Alternatively, you stand the computer on end like a tent. 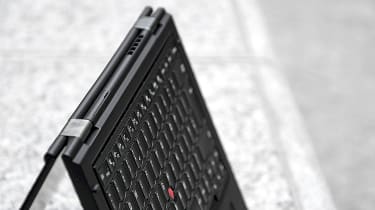 Although 1.3kg is very light for a 14in laptop, it's hefty enough for a tablet that we're not convinced that many people will want to regularly use the X1 Yoga as one. The other modes are more useful, for tasks ranging from browsing photos to giving deskside presentations to colleagues and clients. It's a generally smooth, responsive and accurate touchscreen, but it can be prone to sluggishness which is a surprise. Given the powerful Intel processor inside, it's likely due to a poorly optimised touchscreen controller.

One advantage that the X1 Yoga does have over many other bog-standard Windows hybrids is the inclusion of a stylus. It slots into nook on the right hand side of the computer when not in use, so you don't lose it. Although not quite as precise as the Surface Pen or Apple Pencil, it is pressure sensitive and more than good enough for signing and annotating documents as well as sketching. 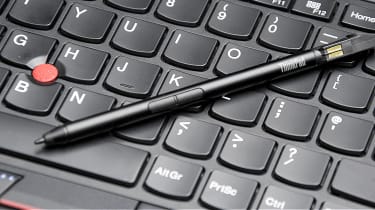 The presence of the stylus might tempt you to buy it for your company's graphic design department. The screen on the X1 Yoga is mostly up to snuff for that kind of role. Although not especially bright, it was nonetheless pleasing with high levels of contrast and colour accuracy. It's sharp with plenty of working room thanks to its 2560x1440 pixel resolution. The one potential limitation is the 16:9 aspect ratio which will feel a little narrow when drawing with the stylus, but this is very much a matter of taste. Everyone will be pleased that, despite the screen's glossy sheen, it did a surprisingly good job at keeping glare from overhead lighting to a minimum. 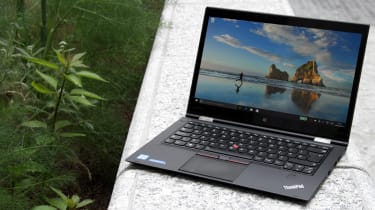 Whether you want to use the X1 Yoga as a hybrid or just' as a laptop, there are plenty of extras aimed at business users to help you along your way. The version on review here comes with a LTE 4G modem fitted - you have to close the lid to get to the slot on the back of the laptop which is covered by a protective flap.

Oddly, there's no fingerprint reader even though there's clearly space for one - its spot below the keyboard was blanked out on our review unit. IT managers will nonetheless be pleased by the three year onsite warranty as well as the port for connecting docking stations which will work with ThinkPad docks made in the past couple of years. We do wish Lenovo would pick a single standardised charging connector for all its laptops though, making life easier for hot deskers in companies that deploy Lenovo laptops from the company's business and consumer ranges. 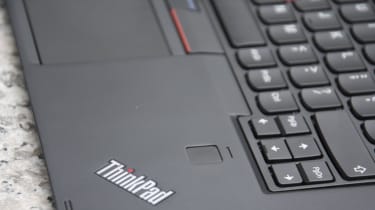 Slenderness, a lightweight build and 4G are of no use if battery life isn't long enough. While the X1 Yoga isn't chart topping in this regard, it still fared well enough in our tests that it should be able to last most working days. It lasted just over seven hours in our moderate usage test, just under eight hours in our less demanding video playback test and 11 hours and 24 minutes in our very light usage test.

Although our review unit only had a SATA3 SSD instead of one that connects via NVMe PCI which is far faster, it's still fast enough for plenty of demanding work thanks to the 8GB of RAM and the dual core Intel Core i7 6500U processor. The latter is fast for a power-efficient ultra portable laptop CPU, with a clock speed of 2.5GHz can temporarily turbo boost to 3.1GHz when necessary and has Hyper Threading.

Some of Lenovo's older Yoga consumer laptops had a tendency to overheat, becoming scorchingly uncomfortable when used on a lap. A few subsequent models went too far in the other direction by keeping their processors at such a slow speed, so as not to overheat or require cooling from noisy fans, that they became unacceptably slow.

Thankfully, the X1 Yoga manages to strike a more sensible middle ground. The underside never became unbearably warm and while the fan did become audibly intrusive on occasion, this didn't happen too frequently in our experience.

One of the most obvious differences between the ThinkPad range and Lenovo's consumer laptops is the presence of the touchstick, the long-lived nub-shaped pointing device. Most people will shun it in favour of the touchpad, but longtime ThinkPad users will love it. It arguably works better for precise line-by-line scrolling (hold down the middle touchstick button and then move the touchstick to scroll up or down) than the slightly janky and juddery multitouch gestures on the touchpad. 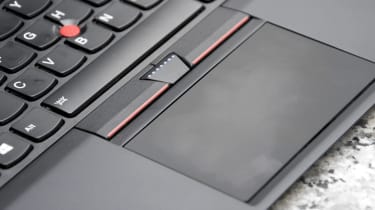 Another problem with the touchpad is that its built-in buttons require quite a precise press, while the alternative of simply tapping the touchpad's surface to click on something wasn't always recognised. These niggles didn't crop up too often, but were very annoying when they did. The touchstick isn't without problems of its own - the nub could be raised a little higher and its separate set of buttons felt a touch too spongy. Neither one is perfect, spoiling the X1 Yoga.

At least the keyboard is generally well designed. Although not quite as good as classic IBM ThinkPad keyboards, the keys are large, well-spaced, backlit and give plenty of travel and feedback when pressed. Our only real annoyance is that, in long-standing ThinkPad practice, the Fn keys has taken the Control key's usual place which will trip up frequent users of keyboard shortcuts. You can swap the functions of these two keys in the BIOS, although this obviously doesn't change the physical labelling. 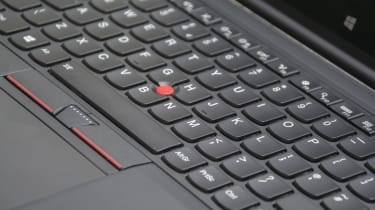 Although we remain unconvinced about the utility of most of the X1 Yoga's tablet capabilities, there's still much to like about this computer. From the stylus, the built-in 4G and the high quality keyboard to the generous warranty and sturdy build. Even so, the janky touchpad and touchstick and the very high price give us pause. The X1 Yoga becomes more compelling if you have a Lenovo service contract or are heavily invested in ThinkPad docking stations and chargers or if you are particularly enamoured with the stylus. If not, then we'd carefully consider alternative ultra portable laptops from the likes of Apple and HP.

By no means a bad ultraportable laptop, but the X1 Yoga isn’t quite good enough to fully justify its high price