Shiny and wafer thin, yet also missing the point of an ultra portable laptop 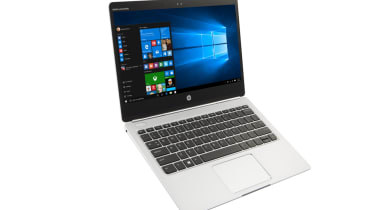 Design' is a word that tends to be horribly misused, at least in the world of IT. Here, design doesn't just mean the appearance of a product, but also how that product works from the bottom up. How a device looks is informed by how it works and vice-versa - the very best computing products combine the best of both worlds with one informing the other. It's a valuable lesson that HP has somehow forgotten with the EliteBook Folio G1. While this ultra portable laptops looks great, there are far too many gaps in how it works.

There's no doubting that the HP EliteBook Folio G1 looks and feels great. The metal unibody casing and black glass surrounding the screen are highly reminiscent of Apple's 12in Retina MacBook, especially as it has almost no other ports besides USB-C. It's not a complete copy of Apple's trend-setting ultra portable though - the shiny hinge and the speakers' distinctive cross-hatch grill pattern help set it apart.

While the Folio G1 is dependent entirely on USB-C for connecting any sort of wired peripherals, including video-out, and for charging, HP had the good sense to include two USB-C ports rather than just one as Apple opted to do on the MacBook. 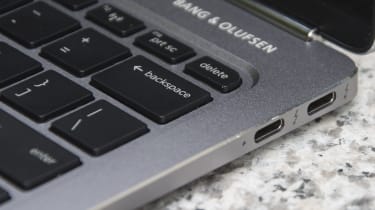 Annoyingly though, the two ports are placed quite closely together - close enough that we had trouble inserting and unplugging a USB-C flash drive while the charger was also plugged in. A little more clearance between the two ports, or perhaps placing one on the opposite side of the laptop, would've been better. There's no SD or SIM card slot of any kind - the only other physical port is the 3.5mm combined audio input and output jack. 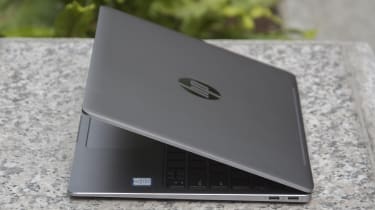 The Folio G1 is completely silent as it has no fans. This is made possible by its Intel Core m7-6Y75 processor which is power-efficient enough to not need a fan. It's no speed demon in either our benchmarks or everyday use - we noticed some periodic sluggishness when using webapps which is surprising. Still, combined with 8GB of RAM, it's quick enough for most office productivity tasks.

The processor can turbo boost from 1.2 to 3.1GHz as needed, but this is when its lack of a fan became most obvious. When turbo boosting, the underside of the metal laptop became noticeably and uncomfortably hot - sometimes unbearably so - which is a significant flaw.

Battery life was a mixed bag. It initially appeared very poor, lasting less than four and a half hours playing H.264 video. But it did fare a little better in our other tests, lasting six hours and 42 minutes when web browsing while playing video intermittently. It lasted a more impressive ten and a half hours when scrolling through a text document.

HP Inc clearly has work to do in optimising the battery for all situations. Even in sleep mode, the battery lost a lot of charge compared to other Core M laptops. All of this is a real shame - at just over 1kg, the Folio G1 would otherwise be ideal for working on the move.

It's not all bad. The keyboard is excellent - no surprise given that HP has arguably overtaken both Lenovo and Apple in producing the best laptop keyboards around. The large, well-spaced and crisp keys have plenty of travel and give lots of feedback when pressed. They're backlit too for working in dim conditions.

HP Inc has wisely abandoned the touchpad from the EliteBook Folio 1020 which aped the needless pressure sensitive touchpad of the MacBook. Unfortunately the touchpad here has problems of its own. It was often sluggish at recognising the presence of our finger, its tracking was annoyingly laggy and its accuracy was often a bit off. All of these flaws made for a very frustrating experience. 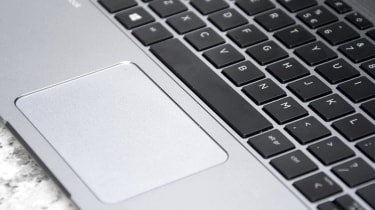 The touchscreen was no better. Although the hinge can tilt back far enough so it lies parallel to the keyboard, reaching from the keyboard to prod at the screen is a quick recipe for arm ache if done for any extended period of time. It wasn't even good enough for occasional taps and strokes, as the touchscreen's touchsenstivity was off - we had to angle our finger quite specifically to get it recognised by the touchscreen.

It's no surprise to see that the 12.5in screen has a 4K resolution of 3840x2160 pixels - an increasingly common sight on high end laptops. Windows 10 on the Folio G1, out of the box, is set by default to show crisper text rather than attempt to show as much working space as possible.

You can change this setting of course, although the pace of developers upgrading their software to take advantage of such high-resolution, high pixel density screens remains frustratingly sluggish. Even HP itself isn't immune - a few screens in the BIOS were almost unreadably tiny as they hadn't been designed with a 4K screen in mind. 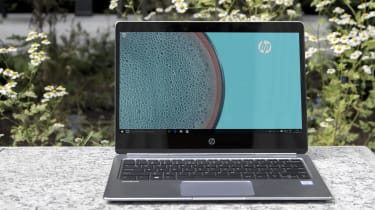 This situation is likely to affect you particularly strongly if you use a lot bespoke in-house software which tends to get updated even more infrequently. In the case of legacy apps, where the in-house or contract staff who coded it have long since moved on, it may not be even feasible to upgrade the software to make it work properly.

At least the screen itself is very bright with vibrant colours and a high degree of colour accuracy and contrast. Glare caused by overhead lighting reflecting off the display's glossy finish can be an annoying problem. You can work around it by pumping up the screen's brightness, although this will obviously deplete the battery faster.

There are some extras that business users will particularly appreciate. The three year warranty is no surprise. An unexpected bonus is the ability is an option in the first-run setup wizard to bind new Windows user accounts to existing Azure Active Directory accounts.

We've been fond of previous HP laptops, so the lack of attention to detail in the HP EliteBook Folio G1 is surprising. From responsiveness, performance and cooling to battery life and ergonomics, HP has fumbled the ball with the design of this ultra portable laptop.

There’s a lot to like with HP’s super thin ultra portable laptop, but one too many flaws mean we can’t recommend it wholeheartedly 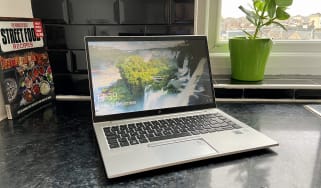