A promising Surface Pro clone, let down by underwhelming hardware 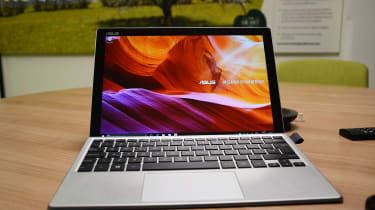 The Transformer Pro features a 12.6in QHD screen, which makes it slightly larger than the 12.3in that has become an unofficial standard. However, at 2160 x 1440p, it's a lower resolution than the Surface's 2736 x 1824, meaning the screen can't quite keep up in terms of quality. It's also disappointingly dull, with a maximum brightness of 260 cd/m2, making it a difficult device to use outdoors or in an especially well lit office. Colour reproduction was also disappointingly low at just 85.6%, no match for the Surface Pro's 95%.

You're able to improve the performance somewhat through Asus' Splendid Technology tool, which lets you switch between colour profiles, or use manual adjustment to tweak the screen to your liking. There's also Asus' Tru2Life app that promises to boost the vibrancy and clarity of colours in videos, although the effects are a tad underwhelming.

Our review model came with a Core i7 processor clocked at 2.7GHz, supported by 16GB of RAM and a 512GB SSD. That's some serious hardware for a 1,300 machine. To get a Surface Pro of a similar spec (albeit with a more powerful processor), expect to pay at least 2,149, and that's before adding on the price of a keyboard and stylus. There's also an i5 model available with 8GB RAM and 256GB SSD for 200 less.

Unfortunately the Transformer Pro struggled to deliver in our benchmark tests, scoring just 39 overall. That's around the same performance mark as the Surface Pro 4, but no where near the monster output of Microsoft's newest Surface Pro model (102).

In reality, the Transformer Pro T304 will serve nicely as a day to day workhorse. It may lack the power of similarly specced 2-in-1s, but it's more than capable of handling most work tasks with ease, and that 16GB of RAM is able to support more browser tabs and open applications than you'd ever use.

The biggest issue is its battery life, which lasted just 5 hours 40 minutes in our benchmark tests. It sits slightly behind most of its competitively priced rivals, such as the Acer Switch 5, but far behind the 11 hours 33 minutes achieved by the Surface Pro. In fact, that meagre battery life means all the multi-tasking potential is lost if you're working without a charger. It also means you're unlikely to get a full day's work out of the Transformer Pro, and the need to keep a charger nearby may be a deal breaker for some.

On paper, the Transformer Pro T304 is every bit the Surface Pro killer we've been promised by similar devices trying to steal Microsoft's 2-in-1 crown. It's a similar design, with like for like specs, at a price point that significantly undercuts its rival.

However, in reality the much cheaper Transformer Pro buckles when held up to the same standard. Its i7 processor is far behind the power of the latest high-end Surface Pro, battery life is short enough to be a concern, especially if you're away from the office, and its display is average at best.

Yet there's still some serious value here that can't be ignored. For just over 1,300, you're getting a Surface lookalike with a monster spec, and a keyboard and stylus thrown in. Bottom-end Surface Pros start at 1,050, once you factor in the keyboard and stylus, and the price goes up significantly if you want beefy internals.

It's unfortunate that it's let down by a woeful battery life and underwhelming performance, and you're likely going to get a better deal if you opt for something a little cheaper, such as the Acer Switch 5. However, if you're after the look and feel of a Surface Pro, but you can't quite stomach the high asking price, then this is one of the best clones on the market.

On paper the Transformer Pro promises to undercut Microsoft's market leading Surface Pro with beefy specs and like-for-like design, but underwhelming performance and a woeful battery life scupper its chances at the crown.